The Bold and the Beautiful Spoilers: Brooke Pushed Thomas Over The Cliff For Nothing – Hope’s Mom Now A Villain?

BY Sean O'Brien on August 27, 2019 | Comments: one comment
Related : Soap Opera, Spoiler, Television, The Bold and the Beautiful 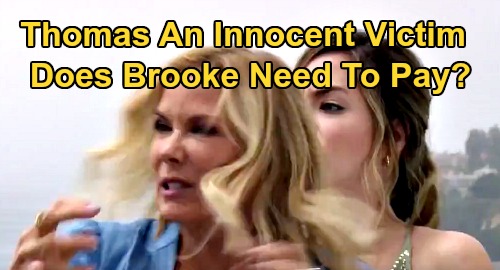 The Bold and the Beautiful spoilers tease that Brooke Logan Forrester’s (Katherine Kelly Lang) belief that her daughter was in danger is leading to more trouble than just Thomas Forrester’s (Matthew Atkinson) coma. It appeared to Brooke that Thomas was endangering her daughter, when he wasn’t. But, as daytime fans know, appearances can be deceiving.

Thomas made a mad dash to the cliff house, arriving before Brooke and Ridge Forrester (Thorsten Kaye). Hope didn’t hear her unwanted husband knock, or ring the door bell. So he either has a key to his sister Steffy Forrester’s (Jacqueline MacInnes Wood) home, or entered through an unlocked door.

Quiet as a cat, Thomas approached Hope Forrester (Annika Noelle). She was sitting on the couch gathering her daughter’s, Beth Spencer (Madeline Valdez and River Davidson), clothes and other items. Hope didn’t see Thomas, as her back was turned toward the beach front part of the former Steam house.

Thomas asked Hope about the annulment. She didn’t recognize that Thomas was trying to apologize. Hope can’t be faulted for her frightened reaction to Thomas’ arrival, or her initial interpretation of what he was saying because of all that was just revealed about his previously hidden actions. That’s Brooke’s stance now as well.

Douglas told Thomas that he wanted to see the good version of him again and that he was his best friend. It was arguably the most touching scene in recent memory.

Atkinson’s alter ego truly had a breakthrough as a result of that one-on-one with his son. Thomas’ first step on a desired road to redemption was to make things right with Hope. Then, Brooke arrived at B&B’s breathtaking outdoor scene and ran down to the hedge, where her daughter appeared to be in danger.

Brooke got between both seemingly battling parties, spoke to Hope, then to Thomas, and spoke to Hope again before turning back around to face Thomas. Brooke put her hands on him and pushed in order to separate the annulling couple. But they weren’t feuding as Hope later realized.

Thomas went over the cliff, establishing that week’s literal cliffhanger and the next step in this radically shifted storyline. The villain torch, first passed from Reese Buckingham (Wayne Brady) to Thomas, now lies in Brooke’s stunned hand. Will Brooke wind up on trial for attempted murder? Should she? CDL is a leading source for everything linked to The Bold and the Beautiful. Check back regularly for B&B spoilers and news!