The Bold and the Beautiful Spoilers: Brooke Unleashes Rage On Flo, Zoe, & Shauna – Leads Charge For Prosecution and Prison

BY hellodrdavis on July 28, 2019 | Comments: one comment
Related : Soap Opera, Spoiler, Television, The Bold and the Beautiful 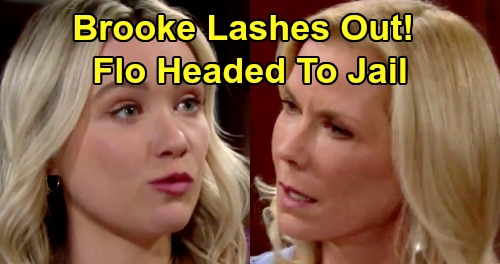 The Bold and the Beautiful spoilers tease that Brooke Forrester (Katherine Kelly Lang) is going to be absolutely furious when she finally learns the news that her granddaughter Beth Spencer is alive. Of course, a big part of her will be joyous and relieved that Beth is living, but her feelings of joy will quickly turn to rage as she learns what transpired over the past few months and exactly who was responsible for keeping Beth’s existence a secret from Hope Forrester (Annika Noelle) and everyone else.

Things will start to come together for Brooke when Florence “Flo” Fulton (Katrina Bowden) finally breaks down and tells her and Ridge Forrester (Thorsten Kaye) the whole truth about Beth, and how she’s known for months that Phoebe Forrester (River Davidson and Madeline Valdez) was actually Brooke’s granddaughter.

B&B viewers should see some great scenes as Bridge try to process what they’re hearing from Flo and ultimately realize that Phoebe is not actually Ridge’s granddaughter, but she’s Brooke’s granddaughter. Plus, Ridge will have to hear some very disturbing details about his son Thomas Forrester (Matthew Atkinson), while Brooke hears conformation about what she’s suspected about Thomas all along.

Well, it seems that Brooke won’t be satisfied with simply hearing the details from Flo; she’ll have some serious questions for her and the other secret-keepers. After all, Brooke has watched Hope suffer with intense grief, depression, and angst over the past few months since she “lost” Beth, and she’s going to want some answers for why all of this had to go down.

According to B&B spoilers, Brooke will turn her rage on Flo, Shauna Fulton (Denise Richards), and Zoe Buckingham (Kiara Barnes). It sounds like she’ll summon them all to a meeting and let them know in no uncertain terms just how furious she is with them. Plus, Brooke’s going to want details about how everything went down, who threatened whom, and who actually wanted to keep her daughter in the dark about Beth.

Look for some heated and lengthy scenes where Brooke unleashes on the secret gang. She’ll probably be most horrified by Flo and Shauna’s actions, since they are supposed to be family. One can only imagine the tension between Brooke and Shauna, as Brooke rails on Shauna for encouraging her daughter to keep the secret simply to keep on fitting in as a Logan.

Of course, in coming days when everyone has calmed down a bit over the initial shock about Beth being alive, decisions will have to be made about whether charges will be pressed against those involved in the cover up. A lot of it may ultimately be out of anyone’s hands once the authorities become aware of the kidnapping and the fraud the occurred with the adoption, but we can imagine that Brooke will be leading the charge for prosecution and prison!

Do you think that Flo has any hope of regaining her “Logan” status once Brooke learns the truth about what she did to Hope? Stay tuned to the CBS soap and don’t forget to check CDL often for the latest Bold and the Beautiful spoilers, updates, and news.