BY Heather Hughes on July 28, 2019 | Comments: one comment
Related : Soap Opera, Spoiler, Television, The Bold and the Beautiful 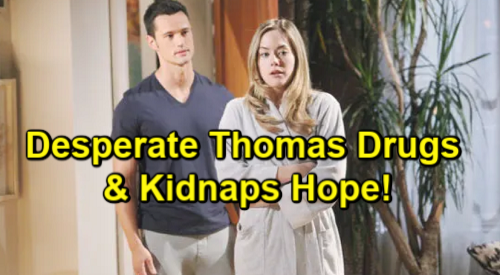 The Bold and the Beautiful (B&B) spoilers tease that Thomas Forrester (Matthew Atkinson) will grow increasingly frustrated with Hope Forrester (Annika Noelle). He’ll want Hope to focus on him, but she’ll keep going on and on about Douglas.

Hope will reiterate that she wants to be a mother to Douglas and give him the family he deserves. She’ll try to make Thomas understand that’s all she’s interested in.

Of course, Thomas will refuse to accept that. He’ll become angry with Hope for making this all about his son when he wants a real relationship. Thomas will even score some drugs from Vincent Walker (Joe LoCicero) and plan to make Hope see things his way with them. However, that plan won’t pan out.

Thomas Forrester Will Begin To Panic As His Plans Fall Apart

Liam already had deep feelings for Steffy Forrester (Jacqueline MacInnes Wood), so the drug Thomas gave him just brought those to the surface. His inhibitions were lowered, so it was easy for Liam to just surrender to how he felt about Steffy.

Hope, on the other hand, doesn’t feel much other than compassion for Thomas as a single father. Drugs aren’t going to make her love him and crave sex.

It doesn’t look like Thomas will actually rape Hope, but she still may end up drugged and disoriented. The Bold and the Beautiful spoilers say Liam Spencer (Scott Clifton) will learn the truth about Beth Spencer, so Thomas will find out what he knows and start panicking. He’ll realize he needs to whisk Hope away before his new marriage falls apart.

Liam Spencer Will Race Against Time To Save Hope Forrester

Thomas has come too far to just ditch his dream of a future with Hope. He’ll be willing to do whatever it takes to keep that dream intact. B&B fans can expect Hope to be confused as the week of August 5-9 kicks off. That could be due to the drugs as well as Thomas’ insistence that they should get out of town. Thomas’ behavior will quickly terrify Hope as she tries to figure out what’s going on.

Meanwhile, Liam will race to stop Thomas and save Hope from his desperate plan. It’ll lead to an explosive showdown between Thomas and Liam, which will culminate in Hope learning the truth about her beloved daughter. The Bold and the Beautiful spoilers say the Beth reveal will bring some big bombshells, so stay tuned!

Are you glad Hope’s finally going to know the truth soon? Are you already dreading the heartbreak for Steffy Forrester (Jacqueline MacInnes Wood)? We’ll give you updates as other B&B news comes in. Stick with the CBS soap and don’t forget to check CDL often for the latest Bold and the Beautiful spoilers, updates and news.