The Bold and the Beautiful Spoilers: Flo Gets Pregnant by Wyatt – Twist Brings Hope Adoption?

BY Marcy Cohen on May 1, 2019 | Comments: one comment
Related : Soap Opera, Spoiler, Television, The Bold and the Beautiful 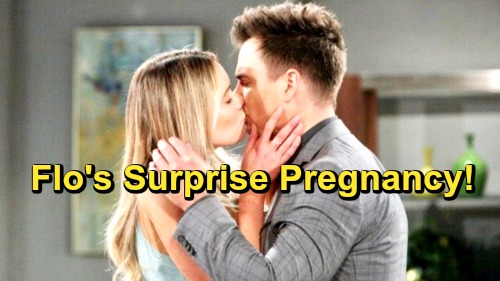 The Bold and the Beautiful (B&B) spoilers tease that Florence “Flo” Fulton (Katrina Bowden) could find herself in another big mess. She still has strong feelings for Wyatt Spencer (Darin Brooks), which will hinder any plans to come clean about the baby swap. The harder Flo falls for Wyatt again, the more of a reason she’ll have to stay quiet. Flo won’t want to risk ruining their budding B&B reunion.

Speaking of that reunion, it could be closer than Flo thinks. Wyatt’s relationship with Sally Spectra (Courtney Hope) is on the verge of destruction, so Flo will have a clear shot soon enough. However, guilt will continue to take a toll on Flo. Sally and Wyatt’s romance will end because of the secret she’s been keeping with Thomas Forrester (Matthew Atkinson), which is nothing compared to Flo’s shocker.

Flo will realize that and worry about what’ll happen if the truth comes out. As she reconnects with Wyatt on a deeper level, Flo won’t want to lose him. Of course, Shauna Fulton (Denise Richards) will be there to coach Flo along the way. She’ll be convinced that everything’s going to be just fine if Flo just keeps her big mouth shut.

Nevertheless, Flo will probably have some close calls along the way. Once she’s sleeping with Wyatt and potentially hearing him declare his love, Flo may be pushed over the edge. She might resolve to come clean about Beth Spencer’s faked death and her adoption as “Phoebe Forrester” (Isabella de Armas and Rosalind Aune). Flo might vow to tell the truth and hope for the best.

What would stop Flo at that point? A real pregnancy might do the trick. That’d open up all sorts of interesting possibilities on The Bold and the Beautiful. Flo would be having Wyatt’s child, so how could she drop the baby switch bomb then? She might be hesitant to throw away their family and their future.

Then again, could Flo want Hope to adopt their baby? Flo will be looking for any strategy to ease her guilt, so that’s an option to consider. Wyatt probably wouldn’t agree, but it wouldn’t stop frazzled and frantic Flo from trying.