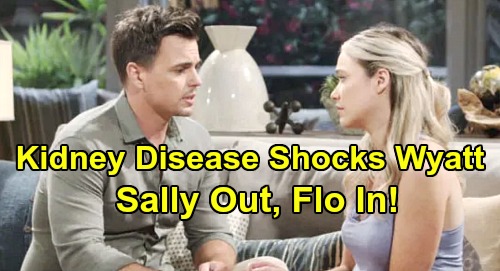 The Bold and the Beautiful (B&B) spoilers tease that “Flo” Fulton (Katrina Bowden) will remain on Wyatt Spencer’s (Darin Brooks) mind – and perhaps in his heart, too. There’s a good chance Wyatt’s issues with Sally Spectra (Courtney Hope) are deeper than he realizes.

Sally accidentally called Wyatt by Liam Spencer’s (Scott Clifton) name, but it’s not like Sally’s been in Liam’s orbit or crushing on him lately. They shared a kiss that’s now ancient history by soap standards. Wyatt is probably just projecting a little. Since he undoubtedly still has feelings for Flo, Wyatt may be convincing himself that Sally isn’t all in either.

Of course, Flo’s onscreen return should shake things up for Wyatt in the new year. Flo hasn’t been around to give him all the usual butterflies and make him remember their old love story. Wyatt’s been able to focus on Sally for the most part, but that’ll change as Sally throws herself into work and Flo gets back in the mix. There’ll be more opportunities for Flo and Wyatt to reconnect.

One way B&B could push Wyatt toward Flo is through some health problems. You may have heard that Monica Ruiz – also known as the “Peloton Girl” or “Peloton Wife” from that mocked commercial – has a guest spot coming up. As CDL reported, Ruiz will play a doctor who shares scenes with Flo at the end of January.

We should note that this apparently won’t be an emergency – at least not at first. Flo will be in regular clothes at the mansion, so it may just be a routine checkup. Flo will need plenty of those as she continues to recovery from that kidney donation. Could this doctor have some concerns about complications? That’s one option to consider.

Even if everything checks out OK, Wyatt could get updates on this doctor visit and express concern for Flo. The Bold and the Beautiful may remind Wyatt of Flo’s sacrifice in the months ahead. He can never thank Flo enough for what she did to save Katie Logan (Heather Tom).

If complications do arise at some point, Wyatt’s fears could make him realize just how much he still loves Flo. He’ll need a reason to finally make the leap and wind up back with Flo. The writing’s on the wall for “Wally” to end, so Sally had better prepare for more heartbreak.