BY Heather Hughes on December 20, 2019 | Comments: one comment
Related : Soap Opera, Spoiler, Television, The Bold and the Beautiful 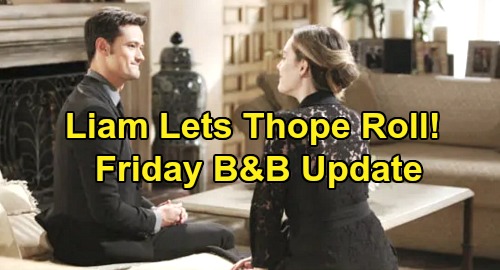 The Bold and the Beautiful (B&B) spoilers update for Friday, December 20, teases that Hope Logan (Annika Noelle) will remain suspicious of Thomas Forrester’s (Matthew Atkinson) new love interest. She finds it tough to believe that Thomas suddenly dropped his pursuit of her and latched onto Zoe Buckingham (Kiara Barnes) instead. In fact, an agitated Hope already asked when exactly Thomas and Zoe got so close.

Of course, Thomas probably took that as a sign that his plan was working. He’s hoping to make Hope jealous through Zoe, so he’ll keep up his efforts on Friday. When Hope grills Thomas about his budding romance, he’ll assure Hope that he’s genuinely moving on. He’ll understand why Hope would have doubts, but he’ll promise he’s ditched his “Thope” dreams and is focusing on Zoe.

With that in mind, Thomas won’t see why Hope can’t work with him on the fashion showdown. He may point out that Hope’s running out of time and clearly has no other options. If Hope wants to have any chance of winning this competition, she needs to get to work! Thomas is willing and able to create some fantastic designs for Hope, so he’ll talk her into joining forces after all.

However, The Bold and the Beautiful spoilers say there’ll be one condition. Hope will refuse to move forward with this working arrangement unless Liam Spencer (Scott Clifton) signs off. She won’t want Thomas driving a wedge between them or tearing their relationship apart in any way. Hope will be honest with Liam about her tricky situation and ask if he’s willing to back her up.

Although Liam will worry about the threat Thomas poses, he’ll tell Hope he’s OK with her teaming up with Thomas. Hope doesn’t need Liam’s permission to do it, but she’ll feel better knowing he’s not completely outraged. What Hope won’t know is the reason Liam will get on board. It’s because Zoe is working as a double agent on a scheme that could take Thomas down.

B&B spoilers say Liam will trust that Zoe can get the job done. He’ll think Zoe will be the perfect secret weapon now that Steffy Forrester (Jacqueline MacInnes Wood) has rehired her at Forrester Creations. Now all Liam has to do is sit back and let Zoe do their dirty work.