The Bold and the Beautiful Spoilers: Flo’s Shocking Confession To Liam and Wyatt – Spills Baby Secret?

BY hellodrdavis on July 23, 2019 | Comments: one comment
Related : Soap Opera, Spoiler, Television, The Bold and the Beautiful 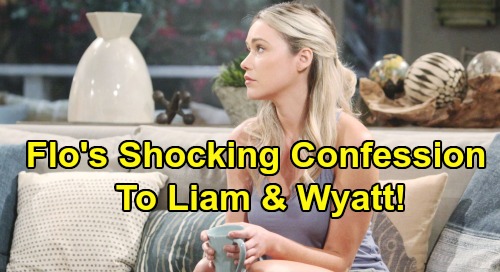 The Bold and the Beautiful spoilers tease that Florence “Flo” Fulton (Katrina Bowden) will finally get a chance to get some of the secrets and lies off of her chest. She’s been struggling with her guilt over keeping the secret over Beth Spencer’s existence for months now. As B&B viewers know, she was a big part of Reese Buckingham’s (Wayne Brady) baby switch and adoption scam, and her remorse has been weighing on her ever since.

She’s wanted to confess her part in the scam, but various people have stood in her way. First there was Zoe Buckingham (Kiara Barnes) and her own mother Shauna Fulton (Denise Richards), who made her enter into a pact to keep the secret forever. But it got even harder for Flo when Thomas Forrester (Matthew Atkinson) entered the picture.

Once Thomas found out about Beth Spencer’s existence and that Beth had been adopted by his sister Steffy Forrester (Jacqueline MacInnes Wood), he became insistent that Flo keep the secret forever, so that he could further his devious agenda to marry Hope Logan (Annika Noelle) and have her become the mother to his son Douglas Forrester (Henry Jospeh Samiri). Thomas has essentially threatened Flo’s life if she spills any details.

But, as B&B viewers know, that threat was overheard by Liam Spencer (Scott Clifton), and according to The Bold and the Beautiful spoilers, he’s going to launch an investigation into the secret that Thomas and Flo are keeping. That’s going to lead Liam to get Flo’s boyfriend Wyatt Spencer (Darin Brooks) involved, and the two brothers are going to try to figure out the secret that Flo’s keeping.

This will lead Liam to question Steffy about Phoebe Forrester’s (River Davidson and Madeline Valdez) adoption, and it will lead Wyatt to subtly quiz Flo about her past as well. And according to The Bold and the Beautiful spoilers, things will culminate in a confrontation during which Flo makes a heartfelt and apologetic confession to Liam and Wyatt!

Now, whether Flo reveals the whole sordid story about Reese Buckingham’s (Wayne Brady) scheme, Phoebe actually being Beth, and Thomas threatening her life after contributing heavily to Emma Barber’s (Nia Sioux) death remains to be seen. But B&B buzz says it’s likely that she’ll only confess to some of the story. For example, she might have to cop to not really being Phoebe’s birth mom but not provide additional details.

Since ongoing B&B spoilers indicate that the baby swap story will take some more twists and turns, including the involvement of a new character, Dr. Jordan Armstrong (Vincent Irizarry) who won’t be on the scene for a few more weeks, it doesn’t look like Flo will spill the whole truth to Liam and Wyatt just yet…but B&B spoilers say she is going to confess something, and that it should be explosive!

What do you think Flo will end up confessing? Stay tuned to the CBS soap and don’t forget to check CDL often for the latest Bold and the Beautiful spoilers, updates, and news.