BY Heather Hughes on July 23, 2019 | Comments: one comment
Related : Soap Opera, Spoiler, Television, The Bold and the Beautiful 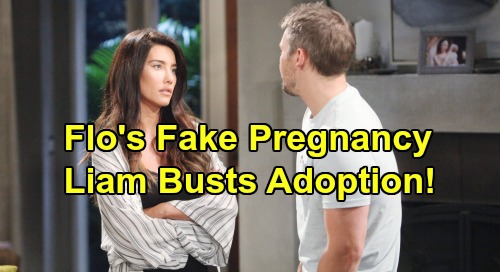 The Bold and the Beautiful (B&B) spoilers tease that Liam Spencer (Scott Clifton) will follow the phony pregnancy trail. He already knows there’s a secret that’s led to tension between Thomas Forrester (Matthew Atkinson) and Florence “Flo” Fulton (Katrina Bowden). Liam just has to put some clues together as he works to find out the story behind that secret.

Since Flo’s supposedly “Phoebe Forrester’s” (River Davidson and Madeline Valdez) birth mother, Liam will begin to suspect something’s not right about the adoption. He’ll be even more concerned after Steffy Forrester (Jacqueline MacInnes Wood) divulges a few details. There’ll be too many things brushed under the rug for Liam’s taste. He’ll feel like this whole situation just isn’t adding up.

Of course, Liam can’t do much with hunches and doubts. He needs proof, so he’ll take steps to get it. The Bold and the Beautiful spoilers say Liam will go back to the day “Phoebe” was born. He’ll think that’s the key to unlocking the secret Flo and Thomas are hiding.

With a little help from Wyatt Spencer (Darin Brooks), Liam will find out where Flo claims to have given birth to “Phoebe.” He’ll contact the Las Vegas hospital to see what he can discover. Naturally, the hospital can’t disclose medical information about their patients. However, Flo wasn’t a patient at all.

It shouldn’t be too hard for Liam to toss around some excuses and learn the hospital has no record of that patient on that date. During the week of July 26-30, Liam will get the news he’s been waiting for. Someone from the hospital staff will call back and likely confirm that no Florence Fulton ever checked in.

Liam will undoubtedly take this info to Wyatt and insist on confronting Flo about her false claims. He’ll think this has bogus adoption written all over it, so he’ll want some answers. Steffy Forrester’s (Jacqueline MacInnes Wood) adopted daughter is on the line here! Liam will want to know the scoop so they can figure out how they’re going to proceed.

B&B spoilers say Liam will explode over Flo’s looming admission. However, half-truths can be almost as dangerous! It seems Flo will only reveal she’s not the true birth mother, so the mystery will continue to unravel.

What will Liam’s next move be? What about Wyatt’s? Will he forgive Flo after she partially comes clean? Wyatt may get past this only to turn against Flo all over again once the rest comes out. An adoption scam is a horrible thing to do to anyone, but it may take grieving Hope and Liam’s involvement to send Wyatt over the edge.