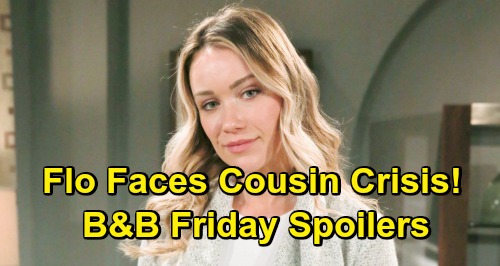 The Bold and the Beautiful spoilers for Friday, April 12, tease that Florence “Flo” Fulton (Katrina Bowden) will be stunned by the news about her father. Shauna Fulton (Denise Richards) has just told Flo that her father was Storm Logan (William deVry), and on Friday’s episode, Flo will learn more details about her dad. She’ll learn that her father is deceased, and that he made the ultimate sacrifice by giving his sister Katie Logan (Heather Tom) his heart.

It will be quite the revelation for Flo. She’ll naturally be happy to finally know who her father is, but the news that she’s suddenly a Logan will come with some big complications. As B&B viewers know, Flo’s keeping the secret that Hope’s daughter Beth Spencer is alive and living as Phoebe Forrester (Isabella de Armas and Redford Prindiville).

Flo feels terrible about what this secret is doing to Hope Spencer (Annika Noelle), and she nearly came clean to Hope about Reese Buckingham’s (Wayne Brady) baby swap and adoption scam and her role in it, but that was before she knew that she was a member of the Logan family. Now that she knows that she and Hope are cousins, she’ll have a dilemma on her hands.

On the one hand, Flo will probably now feel a special sense of obligation to Hope, to tell her the truth about her baby. But on the other hand, right now probably won’t seem like an opportune time for Flo to suddenly spill shocking news to her new family. It would certainly get things off on the wrong foot.

Meanwhile, on the new episode of B&B on Friday, April 12, Bill Spencer (Don Diamont) will feel pensive. In the aftermath of finding out that Storm was Flo’s father, Bill was feeling on top of the world. He was thrilled that the DNA tests proved that he wasn’t Flo’s father and he felt vindicated in front of Shauna and Quinn Forrester (Rena Sofer).

But according to B&B spoilers, Bill will have trouble concentrating for the rest of the day, as he won’t be able to keep his mind on his work. The whole situation with Shauna and Flo may get to Dollar Bill a bit, and he might find himself wondering what would have happened had it turned out that he had another adult child.

Bill’s mind might be on Katie as well. He’ll know that Katie is about to get some amazing news – that she has a new niece. Of course, Katie feels a special connection to Storm, since she has his heart. Bill will know how much it will mean to Katie to have a newfound connection to her brother, and he’ll probably be thinking about offering Katie some support… and maybe Flo.