BY Heather Hughes on August 9, 2019 | Comments: one comment
Related : Soap Opera, Spoiler, Television, The Bold and the Beautiful 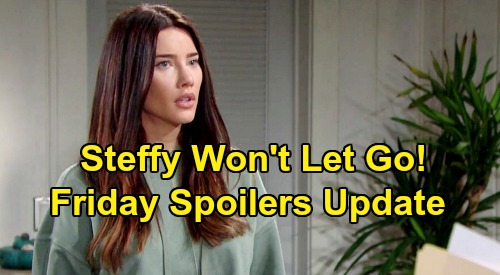 The Bold and the Beautiful (B&B) spoilers update for Friday, August 9, tease that Ridge Forrester (Thorsten Kaye) will burn with intense anger. The more he thinks about the pain Florence “Flo” Fulton (Katrina Bowden) and her fellow secret-keepers have caused, the angrier Ridge will get. Of course, Ridge still hasn’t been able to accept and wrap his head around his own son’s involvement.

Thomas Forrester (Matthew Atkinson) will prove he’s gone truly dark with some upcoming moves, so there’ll be time to deal with him later. Until then, Ridge will concentrate on Flo and Zoe Buckingham (Kiara Barnes). He’s riled up and still has plenty more anger to unleash. Ridge’s concerns about Steffy Forrester (Jacqueline MacInnes Wood) will leave him fuming over her shattered heart.

Perhaps Ridge will point out that Steffy’s probably crumbling as they speak. He’ll want Flo and Zoe to truly grasp the weight of what they’ve done. Not only did Flo and the others leave Hope Forrester (Annika Noelle) drowning in despair for months, they’ve made it so Steffy’s world will come tumbling down. The fact that Steffy now has to give up her sweet little girl will make Ridge explode.

However, there’s no turning back the clock and undoing this damage. What Dr. Reese Buckingham (Wayne Brady) set in motion will have lasting consequences and tear families apart. B&B spoilers say Steffy will try to process the shocking revelation she’s just heard. She’ll be pleased that Beth Spencer (River Davidson and Madeline Valdez) is alive, but it’ll be tough for her to come to grips with Beth being “Phoebe Forrester.”

At some point, Ridge and Brooke Forrester (Katherine Kelly Lang) will join Hope, Steffy and Liam Spencer (Scott Clifton). They’ll naturally side with their respective daughters as a battle breaks out. Brooke will be over the moon about Hope getting her baby back, but Ridge will be more focused on Steffy’s heartbreaking loss. The rest of the Forresters and Logans will join the bitter war eventually.

There’s still a lot of gas left in the tank when it comes to this story. The Bold and the Beautiful spoilers say several twists are looming, but for now it’s all about Beth and where she’s headed – meaning home with Hope soon! Steffy will struggle to let her illegally adopted daughter go, to this is going to be quite a mess.