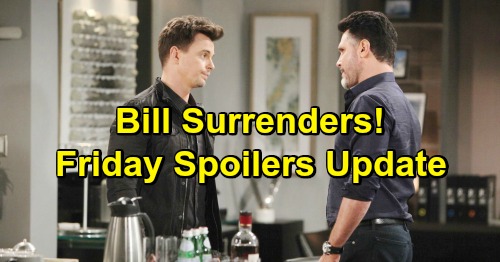 The Bold and the Beautiful (B&B) spoilers for Friday, February 22, tease that Wyatt Spencer (Darin Brooks) will stand his ground. He just told Bill Spencer (Don Diamont) that he’s willing to rejoin the family business, but on one condition. Bill will have to revive Spectra Fashions if he wants his son back on board.

B&B fans know Bill is all about family these days, but he could never forget his first love. Naturally, we’re talking about money! Bill’s mind will flash with dollar signs as he considers what this project will cost him. He may argue that there’s surely something else he could offer instead.

Bill will want to renegotiate with Wyatt, but that’s not going to happen. Wyatt will go all in for Sally Spectra’s (Courtney Hope) sake and hope it pays off. He really has nothing to lose here. Wyatt could walk away from this deal and be perfectly satisfied, so he’ll have no reason to cave in.

The Bold and the Beautiful spoilers say Bill will grumble about it, but he’ll ultimately surrender. He’ll agree to a Spectra Fashions reboot, so Wyatt will be thrilled. They’ll undoubtedly shake on the deal and get the contracts cooking.

Wyatt will be grateful as he heads off to share the good news with Sally. The fact that Bill is willing to do this shows a lot about his growth and the new path he’s on. Wyatt will think this new-and-improved version of Bill just might stick.

Of course, it’s tough to believe Bill can avoid mistakes forever! Let’s just hope the next time he screws up, it isn’t as catastrophic as usual. Bill would truly like to repair his family, so he doesn’t need any major setbacks.

Meanwhile, Steffy Forrester (Jacqueline MacInnes Wood) will remain concerned about Hope Spencer’s (Annika Noelle) obsession. She can tell Hope is consumed by thoughts of “Phoebe Forrester” (Isabella de Armas), which just isn’t healthy. On Friday, Liam Spencer (Scott Clifton) will talk to Steffy about this growing problem. He’ll be on the same page about it being harmful to Hope’s mental state.

Liam and Steffy will be unsettled by Hope’s infatuation, but they won’t know how to handle it. They may not feel right telling Hope how to grieve, but they won’t want to hinder her recovery either. Liam will soon realize just how big of an issue this is.

Next week on new B&B episodes, February 25 – March 1, Hope will push Liam to be a family unit with Steffy, “Phoebe” and Kelly Spencer (Zoe Pennington and Chloe Teperman).