BY Heather Hughes on February 21, 2019 | Comments: one comment
Related : Soap Opera, Spoiler, Television, The Bold and the Beautiful 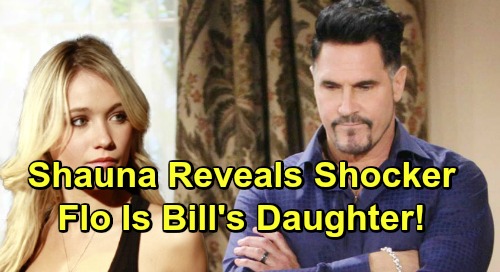 The Bold and the Beautiful (B&B) spoilers tease that Florence “Flo” Fulton (Katrina Bowden) could have a shocking connection on canvas. She’ll be sticking around since she scores a new job in Los Angeles next week. Flo will meet Hope Spencer (Annika Noelle) and immediately face more guilt. Once she puts a face with the name of Beth Spencer’s birth mom, Flo will definitely struggle to stay quiet.

However, Flo will know she has to stick to the plan or risk serious jail time. She won’t want to land behind bars, so she’ll do her best to keep her mouth shut. Things will get messier for Flo when her mother suddenly appears in town. Denise Richards will debut as Flo’s nosy mom, Shauna Fulton, on April 3. The description of her character could offer some hints about that connection we mentioned.

Bradley Bell, B&B’s head writer and executive producer, talked about Shauna in an interview with People. “Shauna is a fun-loving, hard-working single mother from Las Vegas who aspires to live life to its absolute fullest,” Bell said. Let’s see what clues we can glean from that. For starters, the single mom angle is worth noting.

Why point that out? It’s not like Flo is some young girl. She’s a grown woman who lives on her own, so it’s kind of weird to refer to Shauna as a single mother. Perhaps it’s a subtle way of saying Flo’s dad was never in the picture. The fact that Flo took Shauna’s last name backs that up. Maybe Flo’s father doesn’t even know she exists.

This description also notes that Shauna loves to have a good time. If we read between the lines, it seemingly indicates that Shauna is a free spirit who possibly had lots of sexual experiences. That brings us to another potential clue. The Bold and the Beautiful spoilers say Shauna’s “got a past and big secrets to spill.” When you put all this together, it could indicate that Flo’s dad is someone B&B fans know.

Following up on a Facebook leak, the following analysis obtains.  Now let’s think about who that might be. Bill Spencer (Don Diamont) is covered in the son department, but he could use a long-lost daughter. Plus, what’s been the big theme for Bill lately? FAMILY. Bill’s all about being there for blood, so why not add to his brood and complicate this baby swap plot?

The Bold and the Beautiful spoilers suggest Flo may have more scenes with Wyatt Spencer (Darin Brooks) as time goes on. That’d make sense if she’s his sister. They could unknowingly bond and later discover they’re siblings. As for Bill, we all know the stallion likes to get busy. It wouldn’t be surprising if Bill had an extra child floating around.

Shauna just might encounter her former flame when she comes to town. Did she hook up with Bill many years ago? Will she reveal that Flo is Bill’s daughter and shake things up for him? The timing is perfect since Bill and Katie Logan (Heather Tom) are on the verge of a reunion. They’ll need a hurdle, so a long-lost kid would be a good one – especially a long-lost kid who helped with an illegal adoption!