The Bold and the Beautiful Spoilers: Friday, May 31 – Xander Demands Truth From Zoe – Steffy Confronts Thomas About Hope Plans

BY hellodrdavis on May 30, 2019 | Comments: Leave Comments
Related : Soap Opera, Spoiler, Television, The Bold and the Beautiful 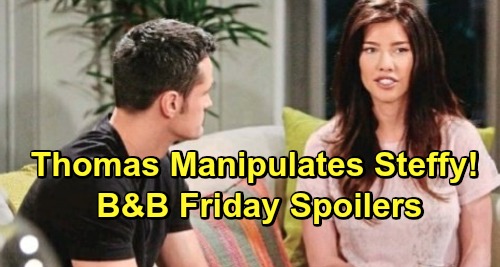 The Bold and the Beautiful spoilers for Friday, May 31, tease that Zoe Buckingham (Kiara Barnes) will be in the hot seat. Xander Avant (Adain Bradley) has just overheard her talking with Florence “Flo” Fulton (Katrina Bowden) about Hope Spencer’s (Annika Noelle) daughter still being alive, and he’s naturally got some questions.

An upset Xander will confront Zoe on Friday’s episode. He’ll wonder just what Zoe meant when she said that Beth Spencer was alive, where Beth is, and why she and Flo are conspiring together to keep the secret. Chances are, Zoe’s not going to be forthcoming with information, at least not at first. But eventually she’ll have no choice but to tell Xander what happened with Beth on Catalina Island.

Xander will be horrified by Zoe’s tale, and B&B viewers should expect a major blow-up between the couple over the matter. Of course, Xander cares deeply for Hope and Liam Spencer (Scott Clifton) and considers them family, so he won’t be keen on keeping the secret right along with Zoe and Flo. Zoe will likely beg him to keep the secret and protect her father, but will Xander oblige?

Meanwhile, on the new episode of B&B on Friday, May 31, Steffy Forrester (Jacqueline MacInnes Wood) will decide that it’s time to have a serious talk with her brother Thomas Forrester (Matthew Atkinson). She’s heard a lot from Liam about Thomas’ meddling in his marriage to Hope, but she’ll want to hear directly from Thomas about the issue.

The Bold and the Beautiful spoilers say that Steffy will confront her brother about his sudden insistence on making Hope a part of Douglas Forrester’s (Henry Joseph Samiri) life. Chances are, Steffy will get the same song and dance from Thomas that he’s given everyone else…namely, that he’s just looking out for his son’s best interest and that Hope and Douglas share a special bond.

But it looks like Steffy will press the issue and want to hear about how Thomas has been getting into Hope’s head about ending her marriage to Liam. Thomas will likely play Mr. Innocent and insist that Hope has made her own choice and that he was just being a good friend to her.

B&B spoilers also say that Thomas will turn the situation on Steffy, and that as their conversation unfolds, he’ll work to manipulate Steffy’s feelings about Liam.

It looks like Thomas will insist that Liam is meant to be an active, full-time father to Kelly Spencer (Chloe Teperman and Zoe Pennington) and Phoebe Forrester (River Davidson and Madeline Valdez), and he’ll try to get Steffy thinking along those lines as well.

Manipulative Thomas will end up making Steffy start thinking about all of the history between herself and Liam, and she’ll spend some time reminiscing about the past…just the way Thomas wants it. Of course, his primary goal at this point is to get Liam back with Steffy so that he can have Hope all to himself.