The Bold and the Beautiful Spoilers: Hope and Liam Reunite After Beth Reveal – Steffy Moves On With New Man

BY hellodrdavis on July 21, 2019 | Comments: one comment
Related : Soap Opera, Spoiler, Television, The Bold and the Beautiful 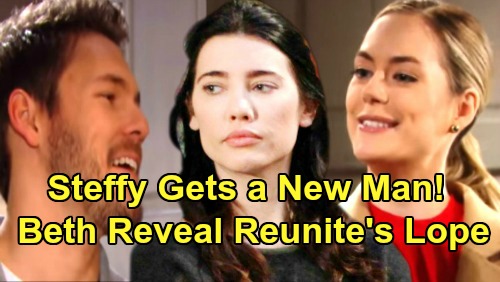 The Bold and the Beautiful spoilers tease that the baby swap storyline may be coming to an end in the next few weeks. As B&B viewers know, it was announced recently that veteran soaps actor Vincent Irizarry would be joining the show as Dr. Jordan Armstong, and that he’d be heavily involved in the storyline revealing that Phoebe Forrester (River Davidson and Madeline Valdez) is actually Beth Spencer. That’s great news to many fans who are anxious to see the big Beth reveal.

But what happens after it finally comes out that Beth is really Phoebe? There will be a lot of fallout from the revelation. Steffy Forrester (Jacqueline MacInnes Wood) will have to hand over her beloved adopted daughter to Hope Logan (Annika Noelle), as Phoebe officially becomes Beth. But what about Hope and Liam Spencer’s (Scott Clifton) relationship?

As B&B viewers know, Hope and Liam’s split was the result of their loss of Beth. Hope determined that she could never have another baby after losing Beth, and she felt like she was standing in the way of Steffy, Liam, Kelly Spencer (Chloe Teperman and Zoe Pennington), and Phoebe being a happy, united family. That led Hope to annul her marriage to Liam and propelled her into a new marriage with Thomas Forrester (Matthew Atkinson).

But surely once the truth about Beth comes out, Hope will drop Thomas immediately. He’ll have his own problems to face, since he knew about Beth’s existence and kept it from Hope and Liam, and it sure would seem fitting for Hope and Liam to reunite after the reveal. Sure, Liam and Steffy slept together on one occasion, and that will be tough for Hope to get over, but ultimately she’ll probably want her ex back.

The Bold and the Beautiful spoilers claim that what Hope has wanted more than anything is to have a family with Liam, her true love, so there’s probably a very good chance that these two will find their way back to each other. It certainly looks like Liam is going to play a big role in discovering that Beth’s alive, and he may end up being the person who finally puts Beth in Hope’s arms for good.

And where will this leave Steffy? Well, it’s been no secret that Jacqueline MacInnes Wood would like a new man for Steffy – and so would many fans. Remember how fans clamored last year (2018) when the handsome “Leo” (Sam Myerson) asked Steffy out on a date? Steffy ultimately turned him down, but ever since then many fans have been itching for Steffy to get a new man.

Even though Steffy and Liam have certainly bonded with the girls since he’s been living at Steffy’s place, neither of them have really moved toward a reunion, despite their one night together. If Steffy’s really serious about “choosing herself” and being on her own, then she’ll probably support a Lope reunion and possibly move forward with someone else.

What do you think? Will Lope reunite once the truth about Beth comes to light? And would you like to see Steffy move on with a new man? Stay tuned to the CBS soap and don’t forget to check CDL often for the latest Bold and the Beautiful spoilers, updates, and news.