The Bold and the Beautiful Spoilers: Hope Denies Steffy Any Relationship With Beth – Plan To Raise Sisters Together Destroyed 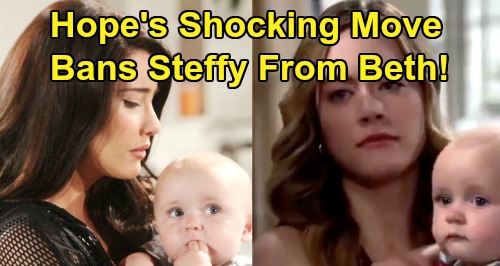 The Bold and the Beautiful spoilers tease that Steffy Forrester (Jacqueline MacInnes Wood) will experience the heartache of all heartaches. She’s going to be told that her adopted daughter “Phoebe Forrester” is actually Hope Forrester (Annika Noelle) and Liam Spencer’s (Scott Clifton) daughter Beth Spencer (River Davidson and Madeline Valdez). And she’s going to have to come to terms with the fact that she’s got to hand the little girl over to Hope.

Well, it doesn’t look like the transition is going to go smoothly according to B&B spoilers, as Steffy is going to have a difficult time letting “Phoebe” go. It looks like Steffy will eventually come to the realization that she’s got to give Beth back to her parents, but it will be a difficult transition for her. She may try to fight it, but ultimately Beth belongs to Hope and Liam.

But what’s going to happen once Beth is handed over and ensconced in Hope’s home? In many ways, Hope, Steffy, and Liam will be back at square one. B&B viewers will remember that when Hope was pregnant with Beth, she absolutely rejected the idea of raising Beth and Steffy’s daughter Kelly Spencer (Chloe Teperman and Zoe Pennington) together as sisters.

At the time, Hope was upset because Steffy was allowing Taylor Hayes (Hunter Tylo) to have access to Kelly, and she announced to both Steffy and Liam that she’d refuse to allow Beth and Kelly to be raised in an extended, blended family and be real sisters because of Taylor. It was a bad situation and was ultimately what led Steffy to want to adopt a child in the first place.

Well, now that Hope has her daughter back, one wonders what’s going to happen with the “blended family” plan. Hope may want to keep Steffy far away from Beth for a while, given that she’s going to be trying to establish a strong bond of her own with Beth. So, where’s that going to leave Beth’s relationship with Kelly? These two have been living as sisters for months now – will their relationship suddenly change?

The Bold and the Beautiful spoilers imply that things certainly won’t be the same, given that the girls aren’t going to be living together anymore. But will Hope even want to foster any kind of relationship between Beth and Kelly going forward? She might balk at the idea, given that it would necessarily mean giving Steffy access to Beth…something that she might absolutely not want.

At any rate, choices are going to have to be made going forward. Will Hope, Liam, and Steffy even try at this point to raise the girls as close siblings? What will their plan be for their two families? And of course there’s the issue of where Liam is going to land…at Steffy’s home with Kelly or in Hope’s home with Beth, which is huge question in its own right!

Do you think that Hope will deny Steffy any kind of relationship with Beth going forward? Stay tuned to the CBS soap and don’t forget to check CDL often for the latest Bold and the Beautiful spoilers, updates, and news.