The Bold and the Beautiful Spoilers: Hope Seeks Cruel Revenge on Steffy After Baby Swap Reveal 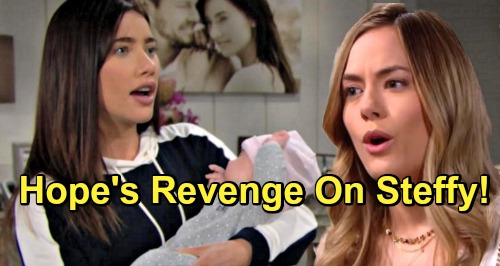 The Bold and the Beautiful (B&B) spoilers tease that Hope Spencer (Annika Noelle) will undergo a major transformation. Hope’s been awfully depressed since that night on Catalina Island. Beth Spencer’s “death” devastated Hope and left her stuck under a mountain of mourning. The only thing that’s helped has been visiting “Phoebe Forrester” (Isabella de Armas and Redford Prindiville).

Hope has had a couple of moments where she lashed out, but she’s mostly just been distraught. She’ll remain down in the dumps as she pressures Liam Spencer (Scott Clifton) to end their marriage. Hope’s work at Forrester Creations won’t go very well either. She’ll likely remain a mess as she struggles to head down this Beth-less path. Hope can’t help but feel like her daughter should still be here.

Of course, B&B fans know Beth is indeed still around. She’s currently living as “Phoebe” over at Steffy’s place, so that shocker has to be revealed eventually. Zoe Buckingham (Kiara Barnes) may not be willing to blab, but other people should get in on this secret down the road. The Bold and the Beautiful spoilers say there’ll be at least one character who’s willing to step up and do the right thing.

If not, Hope may just have to find out the truth herself. There may be some clues that come into play – like the birthmark on the dead baby’s leg as well as that child’s mother. Hope could easily meet that mom at a grief support group meeting. Even Hope’s strong connection to “Phoebe” could prompt suspicions in the soap world. Characters often act on hunches if the plot calls for it.

Zoe’s weird behavior will probably be a red flag, too. Hope may notice that Zoe seems secretive, especially when it comes to Dr. Reese Buckingham (Wayne Brady). There are plenty of ways for he hints to start coming together for Hope. At some point, a DNA test should reunite Hope and her baby girl.

Naturally, The Bold and the Beautiful spoilers say Hope will be overjoyed. However, that won’t be the only emotion she’s feeling. You can bet Hope will unleash her anger on those who have deceived her. That goes for Reese, Zoe, Florence “Flo” Fulton (Katrina Bowden) and anyone else who’s brought in the loop between now and then.

Bold and the Beautiful buzz says Steffy Forrester (Jacqueline MacInnes Wood) will learn the truth and keep quiet at some point. If so, Steffy will certainly face Hope’s wrath! Bottom line, Hope’s personality will shift in a new direction. Her meek nature should be replaced by full-blown rage and a desire for revenge.