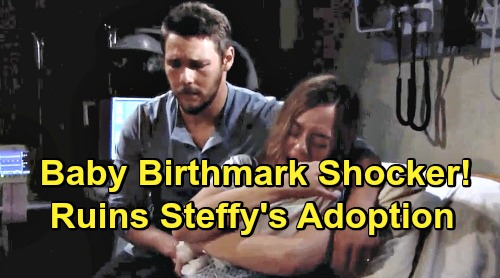 The Bold and the Beautiful (B&B) spoilers tease that Hope Spencer (Annika Noelle) and Liam Spencer (Scott Clifton) will try to move on. Dealing with Beth Spencer’s “death” will really put their marriage to the test, but they’ll want to support each other. They’re both in a lot of pain right now, so they’ll need help to get through this.

While Liam and Hope grieve, Steffy Forrester (Jacqueline MacInnes Wood) will mull over her own family’s future. It’s pretty insensitive to move forward with an adoption so soon after this loss, but that’s exactly what Steffy will do. During the week of January 14-18, Steffy will really look into it. She’ll want to get the ball rolling so she can give Kelly Spencer (Zoe Pennington) a little sister ASAP.

Thanks to Dr. Reese Buckingham’s (Wayne Brady) scheme and connection to Dr. Taylor Hayes (Hunter Tylo), it’s safe to assume “Lope’s” baby will be adopted by Steffy. It’s bound to happen since Steffy suddenly brought up this whole adoption idea out of the blue. B&B can get loads of drama out of this storyline.

Of course, the clock will start ticking from the moment Steffy brings this child home. The countdown will be on to when Hope and Liam will figure out the truth. The Bold and the Beautiful offered a huge hint in Monday’s gripping episode. There could be a major flaw in Reese’s grand plan!

Liam and Hope committed every minute with their fake dead daughter to memory. She’s flooding their thoughts right now, so they naturally studied her body carefully. Liam and Hope commented on the baby’s birthmark, which was on her left leg. That was certainly a clue that’ll somehow come back into play later. It could be part of how the shocking baby swap is exposed.

There are only two other people who would know about this birthmark: Reese and the baby’s mother. Reese certainly isn’t going to say anything, so that leaves Mommy dearest.

How long will it be until this woman crosses paths with Hope and they realize they gave birth on the same day…on Catalina Island…and this lady’s kid had the same birthmark? Alarm bells should immediately start ringing.

Liam will inevitably get in on this revelation, too. A bereavement group meeting might allow for introductions and an exchange of crucial info. Regardless, that wasn’t just some random comment. Soaps aren’t big on coincidences. That birthmark could eventually be what turns Reese and Steffy’s lives upside down!