The Bold and the Beautiful Spoilers: Hope’s Jealous After Thomas Shows Off Romantic Setup for Zoe – Liam Loses, ‘Thope’ Wins

BY Heather Hughes on December 4, 2019 | Comments: one comment
Related : Soap Opera, Spoiler, Television, The Bold and the Beautiful 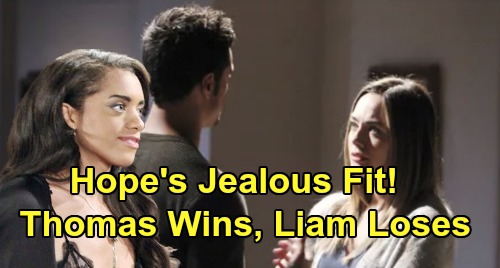 The Bold and the Beautiful (B&B) spoilers tease that Thomas Forrester (Matthew Atkinson) may shift his strategy. B&B fans know Thomas is an extremely confident guy. He’d have to be to think he could keep a woman’s baby from her, make unwanted advices, let her believe she killed him and still believe he’s got a shot! Thomas did all that and so much more, but he’s completely convinced Hope will fall for him eventually.

Hope Logan (Annika Noelle) is Douglas Forrester’s (Henry Joseph Samiri) legal mother, so Thomas can keep pushing the family angle. He’ll also use the work angle once he convinces Hope to team up with him at Forrester Creations. However, Thomas has a lot of obstacles to conquer. We ran down the list of some of his bad decisions, but there’s also Liam Spencer (Scott Clifton) to consider.

Thomas will undoubtedly feel like Liam’s poisoning Hope against him and trying to control her. He’ll need more ammo if he wants to drive “Lope” apart. It looks like Zoe Buckingham (Kiara Barnes) may give Thomas an idea soon enough. During the week of December 16-20, Thomas will plan a lovely romantic setup. He’ll pull out all the stops to make this a very special evening for one lucky lady.

The Bold and the Beautiful spoilers say Hope may be unnerved when she walks in and sees what Thomas has in store. She might confront Thomas about trying to seduce her, but she’s in for a shock. That’s because Thomas will reveal this romantic setup isn’t for Hope. Perhaps Hope will find herself a bit embarrassed over the confusion, but how will she feel next? Relieved? Jealous? A little of both? We’d go with that last one!

There’s a good chance this romantic setup will be for Zoe instead, which presents a few options. It’s possible Thomas will pick up on Zoe’s jealousy of Hope, which could spark this plan. Thomas may realize if he can make Hope jealous, she’ll see that she has actual feelings she can’t ignore. The question is: Will Thomas manipulate Zoe into helping him or just manipulate her into thinking he’s actually interested?

Zoe’s a pretty smart gal, so she’ll probably be wise to Thomas’ plot. She would be suspicious if Thomas suddenly swore off Hope and only wanted Zoe. Even so, Zoe might get on board with a plan of her own. After all, helping Thomas will mean spending more time with him. Spending more time with him could lead to a deeper connection – maybe one that Zoe feels would beat Hope’s lack of interest.

The trouble is…Hope could indeed battle some jealousy and prove Thomas is right. She’s used to being Thomas’ center of attention, so it seems like a reasonable step for The Bold and the Beautiful to take. B&B writers seem to be heading for a “Thope” outcome, and this would be a good path to get there.

It sounds like Hope will battle some complicated feelings no matter what, so stay tuned. We’ll give you updates as other B&B news comes in. Stick with the CBS soap and don’t forget to check CDL often for the latest Bold and the Beautiful spoilers, updates and news.