The Bold and the Beautiful Spoilers: Thomas Insists Hope Will Love Him, Zoe Doesn’t Buy It – Zoe’s Crazy Side Emerges, Won’t Give Up?

BY Heather Hughes on December 4, 2019 | Comments: one comment
Related : Soap Opera, Spoiler, Television, The Bold and the Beautiful 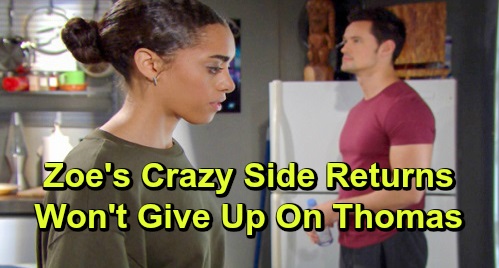 The Bold and the Beautiful (B&B) spoilers tease that Zoe Buckingham (Kiara Barnes) will be back on the scene. She’ll end up grilling Thomas Forrester (Matthew Atkinson) about his feelings for Hope Logan (Annika Noelle) and perhaps trying to get a feel for her own chances. It seems likely Zoe’s crush on Thomas will remain, so she may fish for info and try to figure out if “Thope” is a real option.

Thomas will certainly think so when he speaks to Zoe about the topic of Hope and their future together. Now that Hope is Douglas Forrester’s (Henry Joseph Samiri) legal mother, Thomas will think he’s got his foot in the door of her heart. He knows Douglas can melt Hope like nothing else. Hope’s practically putty in the kid’s hands, so Thomas can keep using Douglas to his advantage.

Of course, Zoe may wonder if Thomas really wants love through manipulation. If Thomas has to use Douglas, what does that say about Hope’s feelings for his father? Zoe might argue that it says Hope’s just not that into Thomas. She may suggest Thomas should ditch this pointless dream of his and take a closer look at what’s in front of him: a beautiful woman who’s actually attracted to him and curious to see where a romance would go.

However, The Bold and the Beautiful spoilers say Thomas will barely even notice Zoe. His Hope obsession runs too deep, so he’ll make it clear that Hope’s the only one in his heart. For Thomas, there’s simply nobody else who makes him feel this way.

That obviously won’t be what Zoe wants to hear, but Thomas will stand by his feelings and plans. He’ll feel confident that Douglas will just be a useful tool – as will his upcoming offer to Hope at Forrester Creations. B&B spoilers state that Thomas will describe his scheme and what he hopes to accomplish.

Thomas will insist on teaming up with Hope on the Hope for the Future line. He’ll feel like it doesn’t matter how he ultimately gets together with Hope. Douglas, work, whatever it takes… Thomas will just think he has to convince Hope this is right and everything will fall into place. He’ll think Hope will love him, and they can live happily ever after.

Will Zoe sit back and accept that? Zoe has a bit of an obsessed, crazy side herself. Will that side start to shine through in the coming weeks? Time will tell, but The Bold and the Beautiful spoilers suggest Zoe may not give up on Thomas! We’ll give you updates as other B&B news emerges. Stay tuned to the CBS soap and don’t forget to check CDL often for the latest Bold and the Beautiful spoilers, updates and news.