BY hellodrdavis on December 3, 2019 | Comments: 3 comments
Related : Soap Opera, Spoiler, Television, The Bold and the Beautiful 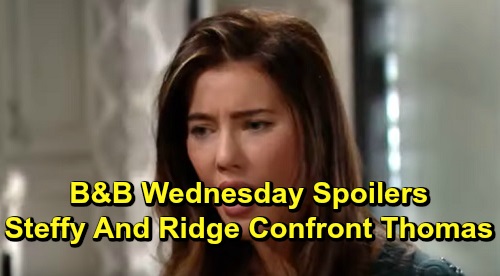 The Bold and the Beautiful spoilers for Wednesday, December 4, tease that Thomas Forrester (Matthew Atkinson) will get an earful from his father and his sister. As B&B viewers know, Thomas signed adoption papers allowing Hope Logan (Annika Noelle) to become Douglas Forrester’s (Henry Joseph Samiri) legal guardian, and that’s something that neither Steffy Forrester (Jacqueline MacInnes Wood) nor Ridge Forrester (Thorsten Kaye) are happy about.

It seems that Thomas didn’t really think through all of the ramifications of his decision. Now Hope is going to have a say in everything related to Douglas going forward, which means that Thomas will be forever tied to her. It all seems too permanent for Steffy and Ridge, and they don’t see why Thomas couldn’t have allowed Hope to just be a part of Douglas’ life without making it all legally binding.

Of course, B&B viewers know that Hope’s original plan was to get joint custody of Douglas, and then petition the court for full custody on the grounds that Thomas was an unfit father. Whether she still intends to go that route remains to be seen, but now that she’s got a legal foothold it will always be a possibility.

At any rate, it seems that Ridge, Steffy, and Thomas will all be in the same airspace on Wednesday’s episode, and they’ll get into it over Thomas’ decision. But knowing Thomas, it’s unlikely that he’ll second-guess his decision. As B&B viewers know, he still wants Hope and thinks there’s a chance that the two of them can be a close-knit family with Douglas.

Steffy and Ridge will probably point out that Hope is happy with Liam Spencer (Scott Clifton) and doesn’t even come close to loving Thomas. But still, it seems that Thomas will have hope that he and Hope will be drawn closer as they co-parent Douglas.

Meanwhile, on the new episode of B&B on Wednesday, December 4, Hope and Liam will be feeling particularly grateful for the Thanksgiving holiday. This will be their first Thanksgiving with their daughter Beth Spencer (River Davidson and Madeline Valdez), and they’ll feel especially celebratory.

Hope and Liam will no doubt prepare for a formal Thanksgiving celebration with their family, but they may also spend some touching moments together with Beth and talk about how very different this holiday season could have been. As B&B viewers know, there was a long period of time when the thought of celebrating the season probably didn’t sound so great, since they were under the belief that Beth had died.

But since they were given such a joyous gift in being reunited with their daughter, they’ll probably want to celebrate big and count their blessing. Look for some touching scenes as Hope and Liam celebrate the day of thanks with their daughter for the first time and anticipate many years of celebrations to come.