The Bold and the Beautiful Spoilers: Katrina Bowden Back on B&B Set – Flo Returns to Steal Wyatt’s Heart, Bad News for Sally

BY Heather Hughes on December 5, 2019 | Comments: one comment
Related : Soap Opera, Spoiler, Television, The Bold and the Beautiful 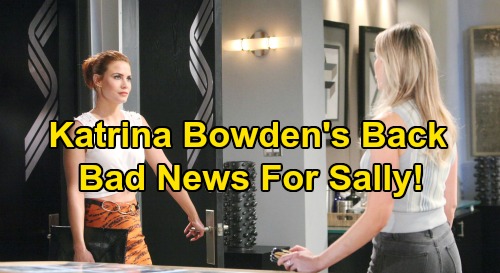 The Bold and the Beautiful (B&B) spoilers reveal that one CBS soap star is officially back on set. B&B viwers may have noticed that Florence “Flo” Fulton (Katrina Bowden) has dropped off the map lately. That’s because Bowden’s been busy shooting a movie in Australia. However, Bowden promised to return when the film was completed – and she kept her word!

On Instagram, Bowden celebrated her big comeback with a new photo and a fun caption. She was looking particularly glamorous in the pic, which scored her plenty of compliments from Bold and the Beautiful fans. Bowden seems eager to step into Flo’s shoes again and stir up some trouble.

“Oooh she back bissshess…let’s go see what moms been up to #soglam #somuchhair @boldandbeautifulcbs,” Bowden teased. She also posted a quick video in a recent Instagram story, which indicated it was “haircut time.” Flo has to be looking her best, especially if she wants to steal Wyatt Spencer (Darin Brooks) away from Sally Spectra (Courtney Hope) – and it’s clear she does.

December 5 was Bowden’s first day back on set, so Flo won’t pop up until January 2020. It should be fun to get another character in the action again. That’s particularly true since it brings the potential for some love triangle drama. Sally made a major blunder by accidentally calling Wyatt by Liam Spencer’s (Darin Brooks) name. Now Wyatt’s going to be looking for any little thing that’ll add to his doubts.

There’s a chance Wyatt’s already hoping his relationship with Sally fails. He was moved by Flo’s generosity after she gave Katie Logan (Heather Tom) a kidney and saved her life. That doesn’t erase the damage Flo did as a lying fake birth mom, but her sacrifice indeed softened Wyatt.

Perhaps absence has also made the heart grow fonder. Wyatt may find himself longing for Flo as we get closer to Bowden’s first airdate back. Flo seems poised to reunite with Wyatt down the road, so Sally may be unlucky in love once more.

Of course, Flo will also catch up with Shauna Fulton (Denise Richards) – as she hinted in her Instagram post. Shauna may be in an intense, full-fledged romance with Ridge Forrester (Thorsten Kaye) by then! Flo should weigh in on Shauna’s love life and question some of her mom’s choices.