The Bold and the Beautiful Spoilers: Liam Pushes Hope Aside For Steffy – B&B’s Tricky Road Back to ‘Steam’

BY Heather Hughes on September 4, 2019 | Comments: one comment
Related : Soap Opera, Spoiler, Television, The Bold and the Beautiful 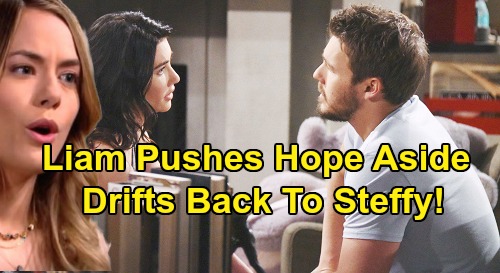 The Bold and the Beautiful (B&B) spoilers tease that Liam Spencer (Scott Clifton) and Hope Logan (Annika Noelle) will face some curveballs. B&B fans know Liam and Hope were on cloud nine after they learned the truth about Beth Spencer (River Davidson and Madeline Valdez). It immediately pulled Liam away from Steffy Forrester (Jacqueline MacInnes Wood), but he’ll have a reason to land back in her orbit soon.

Liam isn’t the kind of guy who sticks with one woman forever. That’s just not how he rolls, and it’s ultimately a good thing since that’d make for a boring life on a soap. Of course, Liam can go overboard on the waffling – particularly between the two loves of his life: Steffy and Hope.

Even so, The Bold and the Beautiful will seemingly never tire of the Lope-Steam love triangle. We’re destined for another round of it sooner or later, so we might as well be prepared. Thomas Forrester’s (Matthew Atkinson) trouble-making may once again push Liam into waffling territory. Let’s consider how Thomas might influence Liam’s romantic direction.

For starters, Thomas certainly won’t want Hope with Liam. He’ll be forced to give up his fight for Hope sooner or later, but he’d still rather see Hope with pretty much any other man on the planet. The conflict between Liam and Thomas is only going to get worse thanks to the custody battle that’s brewing.

Thomas will be furious when Liam tries to take over as the father figure in Douglas Forrester’s (Henry Joseph Samiri) life. He’ll have every reason to want Liam as far away from Hope and Douglas as possible. Thomas is a schemer at heart, so he could fall back on old habits and do some manipulating.

We’ve also got a war brewing at Forrester Creations, which could pull Liam back toward Steffy. The Bold and the Beautiful spoilers say Thomas will challenge Steffy for FC control, so they’ll have a fierce sibling rivalry going on. You can bet Liam’s going to side with Steffy in that.

Steffy Forrester May Cling To Her Career As A Security Blanket

There will also be some tricky situations due to the baby swap exposure. Things will be tough to navigate since the loss is so fresh for Steffy. That could easily create some Liam and Hope drama, too. Liam may think Hope should cut Steffy some slack if she comes down hard on her line or tries to make budget cuts. He may defend Steffy as a woman who’s clinging to her career as a security blanket.

Liam will have plenty of opportunities to drift back to Steffy, which could bring the “Steam” reunion we were building to before. It feels like Steffy and Liam have been robbed of that reunion a few times now, so B&B may finally let them have some happiness down the line.

The Bold and the Beautiful spoilers say some hot drama’s brewing no matter what, so stay tuned. Do you think Liam and Steffy should reunite eventually? Would you rather see Steffy with a new man instead? We’ll give you updates as other B&B news comes in. Stick with the CBS soap and don’t forget to check CDL often for the latest Bold and the Beautiful spoilers, updates and news.