The Bold and the Beautiful Spoilers: Major B&B Character Dies in Shocking Twist – Who Will Meet a Grim Fate? 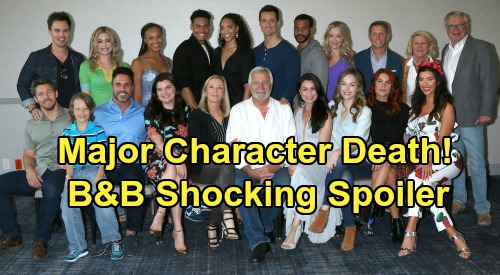 The Bold and the Beautiful (B&B) spoilers tease that death will strike once again during November Sweeps 2019. B&B fans will recall that the baby swap cover-up led to Emma Barber’s (Nia Sioux) sudden demise. Even though Emma wasn’t an important character, it delivered the shock factor and got fans talking. The move also revved up the story’s suspense, so it was a great call all around.

On November 8, someone else will meet a grim fate. The Bold and the Beautiful spoilers say a major B&B character is set to die. Of course, the show may be stretching their definition of “major” here. Characters like Liam Spencer (Scott Clifton), Hope Logan (Annika Noelle) and Steffy Forrester (Jacqueline MacInnes Wood) are presumably safe.

However, we’d hope that major means someone more important than Vincent “Vinny” Walker (Joe LoCicero) or Danny the bartender (Keith Carlos). If they’re going to toss that word around, it should at least be someone semi significant. Basically, we’re looking for someone important but not so important that fans will riot in the streets! There’s a good chance they’re going for shock again and not outrage.

It’s possible The Bold and the Beautiful will throw Xander Avant (Adain Bradley) back in the mix just to kill him off. The Avants are supposed to be featured at some point this fall, so that could be for Xander’s funeral. Zoe Buckingham (Kiara Barnes) is another option, but her new storyline with Thomas Forrester (Matthew Atkinson) is just getting started. It’d be a weird choice to suddenly have her die.

Still, stranger things have happened on B&B. Shauna Fulton (Denise Richards) might be another possibility since Richards tends to be busy juggling multiple projects. Killing off Shauna might be the wake-up call Ridge Forrester (Thorsten Kaye) needs. The Bold and the Beautiful spoilers suggest Thomas may be the one to spark the danger as usual.

Katrina Bowden (Florence “Flo” Fulton) will be in Australia filming a movie for six and a half weeks, but she’s promised she’ll be back. It wouldn’t be the first time an actor lied to protect the story, so you never know. Nevertheless, we’d say Bowden would’ve stayed tight-lipped if she had something to hide.

There’s even a chance B&B will pull something like they did with Caroline Spencer (Linsey Godfrey). They could kill off a major character who’s offscreen and not being used anyway. The only problem is that might be tough to fit with Thomas’ danger. The Bold and the Beautiful spoilers say Liam and Brooke Forrester (Katherine Kelly Lang) will fear for Hope’s safety, but Hope won’t be the only one at risk.

That implies that Thomas may be the reason this person dies. No matter how this plays out, it seems Thomas may prove he’s as deadly as ever! We’ll give you updates as other B&B news comes in. Stay tuned to the CBS soap and don’t forget to check CDL often for the latest Bold and the Beautiful spoilers, updates and news.