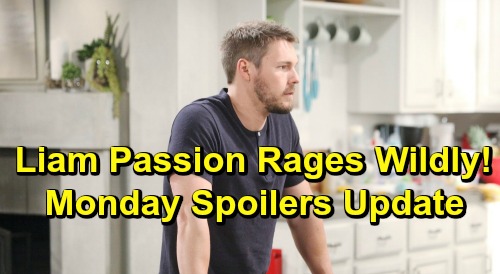 The Bold and the Beautiful (B&B) spoilers update for Monday, July 1, tease that Liam Spencer’s (Scott Clifton) night will take a strange turn. Thanks to the margarita Thomas Forrester (Matthew Atkinson) drugged, Liam’s behavior will start to shift. He’ll begin acting out in some unusual ways, so Hope Logan (Annika Noelle) will be left rattled.

Thomas will feel pretty pleased with himself as it all plays out. He’ll manage to use Liam’s actions to his advantage in Monday’s B&B episode. As Liam pushes Hope away, Thomas will be there to draw her closer. He’ll try to make Hope feel like he’s the only one who can give her the love and security she deserves. Thomas will make it clear that Liam’s part of her past and nothing more.

Meanwhile, Liam will find his bond deepening with Steffy Forrester (Jacqueline MacInnes Wood). Since he’ll have drugs in his system, Liam won’t be quite himself. He won’t exactly be going wild at this party, but he’ll definitely make some moves on Steffy and let her know he’s interested.

Steffy will be taken aback, but she won’t hate the attention. She loves Liam and won’t mind that they’re strengthening their connection. The Bold and the Beautiful spoilers say Liam and Steffy will be ready for lovemaking by the end of the evening. After the party’s over, they’ll hit the bedroom and let some “Steam” fireworks ignite.

Over with Wyatt Spencer (Darin Brooks), he’ll sip Champagne with Florence “Flo” Fulton (Katrina Bowden) and celebrate their future. Now that Flo’s decided to move in with Wyatt, he’ll think they’re going to have a wonderful life together. Wyatt will be glad fate brought them back to each other. He’ll confess just how much he cares about Flo as they make love to cap off their celebration.

Flo will be grateful to have Wyatt by her side, but she’ll have to keep the baby swap secret in the back of her mind. That’s something Flo will never be able to escape. The Bold and the Beautiful spoilers say the truth will come out sooner or later, so Flo should soak up Wyatt’s love while she still can. He’ll inevitably turn against Flo once he realizes she’s been keeping Beth Spencer from Hope.