The Bold and the Beautiful Spoilers: Monday, June 10 Update – Thomas Rages at Flo Over Beth – Hope Fed Up with Brooke 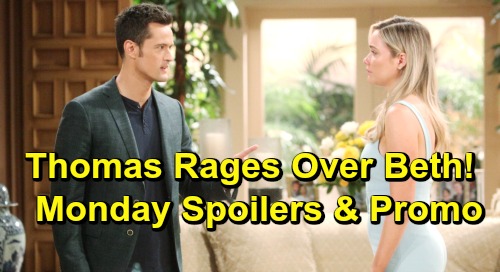 The Bold and the Beautiful (B&B) spoilers update for Monday, June 10, tease that Florence “Flo” Fulton (Katrina Bowden) will break her pact with Zoe Buckingham (Kiara Barnes) and Shauna Fulton (Denise Richards) by spilling the whole truth. She just admitted to Thomas Forrester (Matthew Atkinson) that Beth Spencer is alive, so he’ll have questions and she’ll have answers.

Of course, B&B spoilers say Thomas won’t believe this wild tale at first. Dr. Reese Buckingham (Wayne Brady) duped Hope Spencer (Annika Noelle) into thinking her child was dead, but Thomas will think that sounds too crazy to believe. He’ll think Flo’s either lying for some bizarre reason or has simply lost her mind. It’ll be hard for Flo to sell this story, but she’ll be determined to get it all out in the open.

This should bring Flo relief in some ways and send her anxiety skyrocketing in others. Flo has been dying to get this off her chest, so that part should be rather cathartic. However, Flo will also worry about what Thomas is going to do with this information. She’ll know there could be real trouble if Thomas chooses to pass it on.

Thomas will ultimately believe Flo’s claims, which will bring the infuriating realization that Steffy Forrester (Jacqueline MacInnes Wood) illegally adopted Hope’s kid. Elsewhere, The Bold and the Beautiful spoilers say Brooke Forrester (Katherine Kelly Lang) will express disappointment. She’ll learn Hope went through with the annulment as planned, so she’ll lecture her daughter for walking away.

Hope will get fed up with Brooke’s criticism and fight back. She may be weary of all the guidance when she knows what had to be done. Hope understands that everybody just wants what’s best for her, but she’ll maintain that it’s really about what’s best for the kids.

Hope will feel like Kelly Spencer (Zoe Pennington and Chloe Teperman), “Phoebe Forrester” (River Davidson and Madeline Valdez) and Douglas Forrester (Henry Joseph Samiri) are all going to benefit from her decision. It’s breaking her heart, but she’ll think she can take comfort in her sacrifice.

Brooke still won’t like this, but perhaps she’ll eventually see that Hope’s hurting and just be there for her. Sometimes that’s the only thing a mom can do. The Bold and the Beautiful spoilers say Hope will keep putting one foot in front of the other despite her pain.

We’ll give you updates as other B&B news comes in. Stick with the CBS soap and don’t forget to check CDL often for the latest Bold and the Restless spoilers, updates and news.