The Bold and the Beautiful Spoilers Next 2 Weeks: Liam Defeats Thomas – Katie and Shauna Trick Bill – Wyatt and Flo In Love

BY Heather Hughes on May 4, 2019 | Comments: one comment
Related : Soap Opera, Spoiler, Television, The Bold and the Beautiful 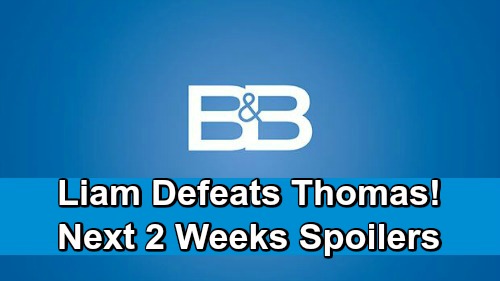 The Bold and the Beautiful (B&B) spoilers for the next two weeks tease that some fierce fights are coming up. During the week of May 6-10, Wyatt Spencer (Darin Brooks) will learn what Sally Spectra’s (Courtney Hope) keeping from him. After scolding Sally for her betrayal, Wyatt will turn his attention to Liam Spencer (Scott Clifton). He’ll warn his brother that Hope Spencer’s (Annika Noelle) in real trouble.

Wyatt will insist that Thomas Forrester (Matthew Atkinson) has been poisoning Sally’s mind. He’ll contend that Liam had better get home and stop this brainwasher while he still can. Meanwhile, Hope will try to spell it out for Thomas. She’ll let him know she’s married to Liam and that’s that, but Thomas won’t think that marriage is meant to last.

Later, Thomas will daydream about Hope accepting that they belong together. He’ll feel like it’s on the verge of happening, but Liam will rush home to burst his bubble. The Bold and the Beautiful spoilers say Liam will order Thomas to stop his manipulation and leave Hope alone.

However, Hope will have more doubts about Liam. She won’t doubt his love, but she will doubt whether the actually belong together. Hope will tell Florence “Flo” Fulton (Karina Bowden) about the problems they’re dealing with and wonder if Thomas might be right. Naturally, a freaked Flo insist Hope can’t walk away from Liam. She’ll feel responsible for all the pain in destruction, so she’ll want to help.

Other Bold and the Beautiful spoilers say Sally will move out of Wyatt’s place. That’ll leave Quinn Forrester (Jacqueline MacInnes Wood) on cloud nine. Sally will eventually blast Thomas for messing things up for her, but Quinn will get an earful as well. After Quinn gloats, Sally will fire back in a big way.

During the week of May 13-17, Wyatt and Flo will strengthen their bond. They’ll take a walk down memory lane and decide if they want to be together in the future. Flo and Wyatt may take this slow, but it’s clear that their feelings are as strong as they were in high school.

B&B fans can also expect a scheme to form. Katie Logan (Heather Tom) will decide to team up with Shauna Fulton (Denise Ricchards) for a special mission. Although Katie loves Bill Spencer (Don Diamont), she doesn’t feel she can truly trust him. That’s why Katie has to test Bill’s loyalty. It sounds like she’ll put Shauna on flirting duty to see if Bill will take the bait.