The Bold and the Beautiful Spoilers: Sally Leaves Town – Quinn Pushes Wyatt and Flo Together 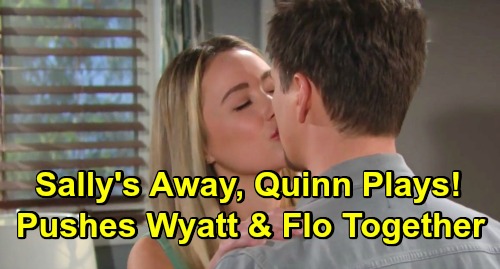 The Bold and the Beautiful spoilers tease that Sally’s (Courtney Hope) desire to spend time with her grams (Shirley Spectra, Patrika Darbo) allows Quinn (Rena Sofer) to see an opportunity. Wyatt (Darin Brooks) isn’t deep into his relationship with Wally, so a change is still possible.

Wally isn’t married. Hey, they’re not even engaged. Ringless, Sally is still an annoyance to Quinn, rather than a permanent life threat, as she will become if Wyatt’s child is eventually delivered.

As for Wyatt, Quinn kept him from Bill (Don Diamont) for years. Eventually, Wyatt learned that Diamont’s often villainous character was his dad, though speculation has rise that B&B might change that history if Flo turns out to be Bill’s biological daughter. As of the moment, Wyatt is a Spencer. So the fans must go with that for now.

Shauna’s (Denise Richards) write-in to the show deepens the intrigue. Why do that unless a dive into drama is coming? It is. But what how many character’s stories and backstories will be affected and when will the reveal, or reveals play out?

Sally likely won’t be gone for long. In them meantime, Wyatt is opting to help Flo find her dad. Along with the Bill tease, it’s fair to suggest that another current, or historical, character could be revealed as Flo’s father.

B&B fans don’t know if Quinn is aware of who this man is, but it feels like she isn’t. Shauna’s arrival should shed light on this issue. Meanwhile, Quinn is hoping to create as many opportunities as possible for Wyatt to feel for Flo as he once did.

Flo has already kissed Wyatt once, since returning and will do so again. She’s obviously still smitten with her first real love. More than just a stir of old school emotions, Flo sees that Wyatt has grown into a good man.

As was seen earlier this year, Flo was used by Reese (Wayne Brady). While she willfully involved herself in a situation that will eventually be exposed and certainly impact her life in a negative way, Flo’s emotions were surely manipulated.

So Wyatt is actually involving himself with a woman from his past who has a covered history that is linked to his brother Liam, (Scott Clifton) and sister-in-law, Hope’s (Annika Noelle) lives. It’s fair to guess that Flo’s dad reveal may also be paralled with the Phoebe-is-Beth conflict.

But, until all of the above develops, Quinn sees an opening for Flo with Wyatt. CDL is a leading source for everything linked to The Bold and the Beautiful. Check back regularly for B&B spoilers and news!