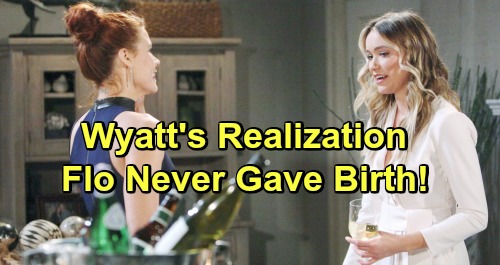 The Bold and the Beautiful (B&B) spoilers tease that Sally Spectra (Courtney Hope) will inadvertently spark questions about Florence “Flo” Fulton (Katrina Bowden) and what she may be hiding. First, Wyatt Spencer (Darin Brooks) will have a chance encounter with Flo during the week of March 4-8. He’ll be surprised to see her since they happen to be former flames.

B&B fans can expect Flo and Wyatt to take a trip down memory lane. Their high school breakup wasn’t their fault, but they’ll still have a lot of pain bottled up. Quinn Forrester’s (Rena Sofer) trouble sent Wyatt fleeing town under cover of night, but he’ll have an opportunity to apologize. He’ll be sorry he never got to tell her where he was going or why.

Fortunately, Flo won’t hold it against Wyatt. She’ll even agree to attend a gathering at Wyatt’s place later, but that could be because she expects Hope Spencer (Annika Noelle) to be there. The Bold and the Beautiful spoilers say Flo just won’t be able to leave Hope alone. Once Flo meets her at Bikini Bar, she’ll want to grow closer to Hope and try to make things right, even if she can’t reveal the truth.

Sally has tried to support Hope in her time of need. Sometimes that plan brought some hiccups – like when she brought Hope a puppy and got blasted for it. However, Sally has tried to be patient and kind. She’s certainly showed Hope that she cares about her and has sympathy for her loss.

Once Flo has a bizarre breakdown at their dinner party, Sally will show concern for her, too. She’ll even point out just how similar Flo and Hope’s situations are. It looks like Flo may end up ditching the shindig early to stop herself from saying too much. Hope and Liam Spencer (Scott Clifton) will probably call it a night soon after.

Of course, that’ll leave Sally and Wyatt to mull over the events of the evening. The Bold and the Beautiful spoilers say Sally will consider something interesting. She’ll note that Flo and Hope were pregnant at the same time, but neither one of them got to take a baby home. Sally will feel like that’s why a strong connection’s forming between them. She’ll think their bonded by their losses in a way.

Reese delivered Hope’s baby, so Wyatt may feel like something strange is going on. He won’t be able to put his finger on it yet, but this could be a real gamechanger if he digs deeper. Will Wyatt eventually figure out that Flo never gave birth at all? Will he uncover the baby swap secret?