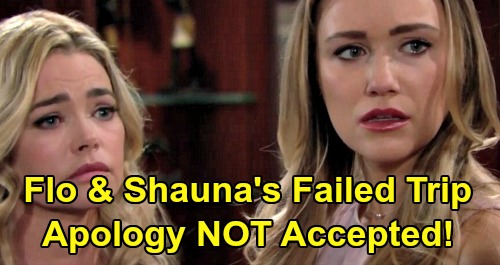 The Bold and the Beautiful spoilers tease that Florence “Flo” Fulton (Katrina Bowden) and her mom Shauna Fulton (Denise Richards) will soon make a bold move. As B&B viewers know, Flo has just come clean to Liam Spencer (Scott Clifton) and Wyatt Spencer (Darin Brooks) about her role in Reese Buckingham’s (Wayne Brady) baby swap and adoption scam, and she’s about to suffer some serious consequences.

For starters, B&B spoilers say that Wyatt will start by promptly dumping Flo. He just won’t be able to take what she’s done and how she’s hurt the people he loves. Wyatt is very protective of his brother Liam, and for Flo to have done what she did to Liam and Hope is simply unforgivable in his eyes.

Then Flo will hear from Brooke Forrester (Katherine Kelly Lang) and Ridge Forrester (Thorsten Kaye), both of whom will be beyond furious at her. They’ll rail on Flo, Zoe Buckingham (Kiara Barnes), and Shauna about the cover-up over Beth Spencer (River Davidson and Madeline Valdez) and for destroying so many lives.

But it seems that later Flo and Shauna will regroup. As B&B viewers know, the whole reason that Shauna wanted Flo to keep the Beth secret in the first place was so that she wouldn’t jeopardize her standing in the Logan family. Shauna won’t want the family to turn its back on Flo now, despite what she’s done. So, it looks like Flo and Shauna will cook up a plan.

Apparently they’ll think that if they can just get to Hope and explain everything to her about how Flo wasn’t out to hurt anyone, and about how she was ultimately duped by Reese and then intimidated into keeping the secret by Thomas Forrester (Matthew Atkinson), then Hope might understand.

So, according to B&B spoilers, Shauna and Flo will sneak into Hope’s cabin in the hopes of explaining their side of the story. This just seems like a terrible idea all the way around, but it looks like they’ll manage to get themselves on the property and to the cabin…and from there, things will get explosive.

It looks like two showdowns will ensue…one between Hope and Flo, and one between Shauna and the Logan sisters. According to The Bold and the Beautiful spoilers, Hope will lash out at Flo and rail against her for her deceit. It’s seriously doubtful that any of Flo’s “explanations” will come out quite right, and they’ll probably just end up sounding like terrible excuses for bad behavior.

And it won’t be a much better scene between Shauna and the Logan sisters. Shauna’s got a strong personality, but she’ll probably be no match for an angry Brooke, Katie Logan (Heather Tom), and Donna Logan (Jennifer Gareis). It’s hard to imagine Shauna being able to say anything that softens these ladies any…not after what Shauna encouraged her daughter to keep from Hope.

In the end, it doesn’t look like Flo and Shauna will come anywhere close to achieving their objective in worming their way back into the Logan’s good graces. In fact, they might just make Hope, her mom, and her aunts even angrier than they were already…which isn’t such a great idea since Hope could very well – and according to B&B buzz, probably will – call the cops on Flo for her role in Beth’s illegal adoption.

Do you think that Flo will ever end up paying the price for what she did? Stay tuned to the CBS soap and don’t forget to check CDL often for the latest Bold and the Beautiful spoilers, updates, and news.