BY Heather Hughes on August 2, 2019 | Comments: one comment
Related : Soap Opera, Spoiler, Television, The Bold and the Beautiful 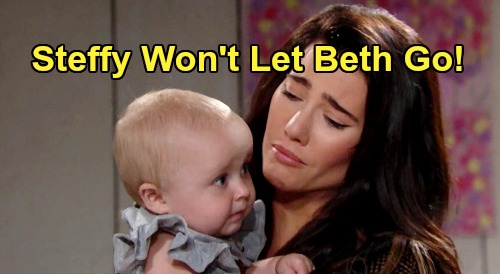 The Bold and the Beautiful (B&B) spoilers tease that Steffy Forrester (Jacqueline MacInnes Wood) will get excruciating news. She was rattled by Liam Spencer’s (Scott Clifton) latest outburst, but she struggled to truly believe “Phoebe Forrester” (River Davidson) could be Beth Spencer. Steffy will continue to struggle once Liam returns with Hope Forrester (Annika Noelle) and confirmation.

Despite Florence “Flo” Fulton’s (Katrina Bowden) and the elaborate story that explains everything, Steffy will be in a state of shock and disbelief. This daughter she’s come to bond with belongs to Hope, so that’s understandably going to be hard to accept. The Bold and the Beautiful spoilers say Steffy will go into protective mode as she faces off with Hope over the baby they both want.

However, Steffy will ultimately inch toward heartbreaking acceptance. She won’t be able to deny that the crazy tale makes sense. Hope’s had an inexplicable connection with this kid for months. It was turning into an obsession at one point. Hope even called “Phoebe” by the name of her “dead” little girl, Beth. The truth’s been starting them in the face the entire time, so it’ll click into place now.

B&B spoilers say Steffy will eventually accept that Flo didn’t give birth and couldn’t sign off on a legal adoption. Even so, the thought of giving “Phoebe” up will be unbearable. How is Steffy supposed to let go when they were supposed to be a forever family? It’s clear that “Phoebe” was an unbelievably important part of Steffy’s life along with Kelly Spencer (Zoe Pennington).

The Bold and the Beautiful spoilers say Steffy will hand Beth over, but what happens after that? She’ll be down a daughter and deeply distraught. Steffy should be beside herself with grief since this will be like a death in a way. “Phoebe” will be gone; only Beth will remain. Steffy can certainly still visit and be around Beth, but she’ll never be in Hope’s shoes ever again. She won’t be Beth’s mother, and that’ll be a tough blow.

How will Steffy handle all this in the weeks ahead? Will she change her mind and take “Phoebe” back in an act of desperation? Steffy might decide she wants a DNA test after all. She may not even believe it’ll bring different results than what they all know. Steffy may just want more time with her daughter. Until that adoption is proven bogus, she has a legal right to keep “Phoebe” under her care.

This could set up Dr. Jordan Armstrong’s (Vincent Irizarry) inclusion in the story later this month. It looks like a health crisis may be involved though, so perhaps a DNA test could lead to further testing and the discovery of something life-threatening. Perhaps Steffy’s inability to truly let go will be a blessing in disguise.