The Bold and the Beautiful Spoilers: Steffy Demands Answers Over Vanished Thomas – Fears the Worst as Hope and Brooke Hide Fatal Story

BY Heather Hughes on November 9, 2019 | Comments: one comment
Related : Soap Opera, Spoiler, Television, The Bold and the Beautiful 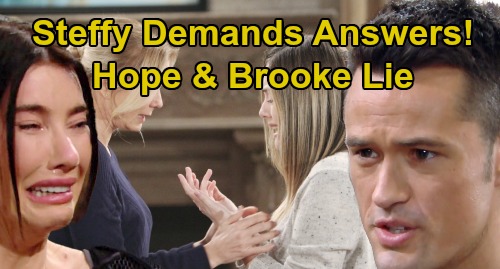 The Bold and the Beautiful (B&B) spoilers tease that Hope Logan (Annika Noelle) will face a total catastrophe. During their latest showdown, Hope pushed Thomas Forrester (Matthew Atkinson) away and sent him flying into the ominous vat below. It won’t be long until Hope’s conducting a frantic search, but that search will bring no evidence that Thomas survived.

Hope will reach the horrifying conclusion that Thomas perished, so she’ll feel like the world’s crumbling around her. She may not like Thomas much at the moment, but she wouldn’t wish death on him – especially not death by flesh-eating acid!

Naturally, Hope’s mind will immediately go to Douglas Forrester (Henry Joseph Samiri). The poor fella lost his mother, Caroline Spencer (Linsey Godfrey), earlier this year. The Bold and the Beautiful spoilers say Hope will worry about breaking more bad news to the kid. How can she look Douglas in the eyes and tell him his father’s dead, too?

Hope will ultimately decide not to tell Douglas or anybody else – with one notable exception. She’ll end up confiding in Brooke Forrester (Katherine Kelly Lang), who she can trust to keep the secret safe. Of course, things could get tougher as questions about Thomas’ fate arise.

During the week of November 11-15, B&B spoilers say Ridge Forrester (Thorsten Kaye) will blow his top over the signed adoption papers. He’ll be furious with Hope for manipulating Thomas into giving her joint custody. Steffy Forrester (Jacqueline MacInnes Wood) will be just as livid. She’ll eventually try to get in touch with Thomas, but she’ll probably think he’s dodging her calls.

As time goes on, Steffy’s annoyance with her brother will turn to fear. The week of November 18-22 will leave Steffy truly worried about Thomas, who’ll still be MIA. She might hold out hope that Thomas is embarrassed about being duped, but she’ll have a bad feeling. Steffy knows Thomas has an aggressive personality and has proven he’s a fighter. He’s not the kind of guy who would just sulk off to lick his wounds.

Steffy won’t want to let her mind go there, but she’ll start to think something awful must’ve happened. Since Hope was the last person to see Thomas, Steffy may determine that Hope holds the key to cracking the case. The Bold and the Beautiful spoilers say Hope will find herself on the hot seat as suspicions rev up.

Steffy may corner Hope and demand the real story, so the Thomas drama’s about to get juicy! This hot plot could take another stunning turn if Thomas is actually alive. There’s a good chance he is since Thomas looked fine after his acid vat dive. His head came up above the liquid and didn’t look mutilated, so maybe it was just water.

B&B should milk this storyline for a while though! It may be a several weeks or even months before Thomas potentially resurfaces. Hope struggle to hide what she believes is a deadly secret for now. Do you hope Steffy will pry some answers out of Hope? We’ll give you updates as other B&B details emerge. Stay tuned to the CBS soap and don’t forget to check CDL often for the latest Bold and the Beautiful spoilers, updates and news.