BY Heather Hughes on September 3, 2019 | Comments: one comment
Related : Soap Opera, Spoiler, Television, The Bold and the Beautiful 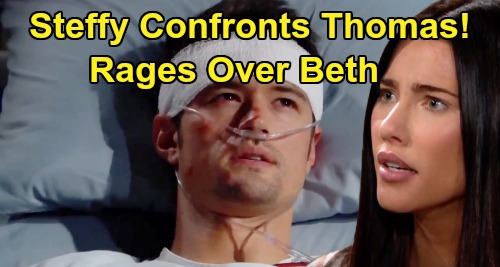 The Bold and the Beautiful (B&B) spoilers tease that Steffy Forrester (Jacqueline MacInnes Wood) will speak her mind. B&B fans know Steffy’s paying the price for all the scheming and lying that went down. Hope Logan (Annika Noelle) suffered for months without Beth Spencer (River Davidson and Madeline Valdez), but now Steffy’s suffering without “Phoebe Forrester.”

It’ll take time for Steffy to work through her feelings and move past this devastating loss. Steffy will definitely still have plenty of anger over all the deception. Her own brother played a key role in this baby swap saga. Thomas Forrester (Matthew Atkinson) wasn’t mixed up with Dr. Reese Buckingham (Wayne Buckingham), but he came in on this later and kept his mouth shut.

The truth hurt Steffy in the end, but she’ll feel like it would’ve hurt less if it’d come out sooner. The Bold and the Beautiful spoilers say Steffy will finally confront Thomas during the week of September 9-13. She’ll have a chance to shout at her brother for destroying lives with his twisted manipulation.

Of course, Steffy won’t just be angry over her own sorrow. She saw what a mess Hope was after losing Beth; it destroyed her marriage to Liam Spencer (Scott Clifton)! Steffy just won’t be OK with the way Thomas convinced Hope to marry him – all while knowing Beth was alive and well.

The fact that Thomas used Douglas Forrester (Henry Joseph Samiri) as a pawn will be a problem for Steffy. She loves that little boy, so she’ll question how Thomas could do all this. Steffy certainly won’t think any of the behavior Thomas displayed was loving. He may claim to adore Hope, but Steffy will feel like her brother’s been self-centered and cruel.

The Bold and the Beautiful spoilers say Thomas and Steffy’s relationship won’t mend anytime soon. She’ll be glad he’s alive after his recent ordeal, but the tension will remain after a Forrester Creations battle erupts. Thomas will prove quite cutthroat, but Steffy will give as good as she gets.

It sounds like some exciting scenes are ahead. We’ll give you updates as other B&B news comes in. Stay tuned to the CBS soap and don’t forget to check CDL often for the latest Bold and the Beautiful spoilers, updates and news.