BY Heather Hughes on August 31, 2019 | Comments: one comment
Related : Soap Opera, Spoiler, Television, The Bold and the Beautiful 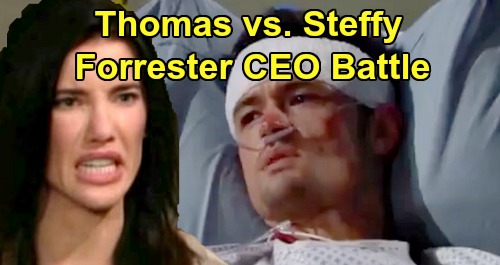 The Bold and the Beautiful (B&B) spoilers tease that Thomas Forrester (Matthew Atkinson) has some rough moments in his future. After awakening in the hospital and answering questions about his fall, Thomas will have to answer questions about a different accident. Detective Alex Sanchez (Jeremy Ray Valdez) will naturally be curious about Thomas’ role in Emma Barber’s (Nia Sioux) crash, but he won’t be the only one.

Ridge Forrester (Thorsten Kaye) will also want the whole truth. He’ll grill Thomas about what really went down that night, so Thomas will spill all privately. The Bold and the Beautiful spoilers say Ridge will explode when he hears the details, but we can’t forget what he told Liam Spencer (Scott Clifton). Ridge will only let his son fall so far, so you can bet he’ll do whatever he can to help Thomas.

However, Thomas will also try to help himself. He’ll find an enemy in Bill Spencer (Don Diamont), who’ll be working toward revenge as well as trying to help Brooke Forrester (Katherine Kelly Lang). Bill will be determined to find enough incriminating evidence to sink Thomas. Since Thomas is sticking around for new stories, it’s doubtful Bill’s scheme will pan out. He’ll be busy dealing with a family tragedy soon anyway.

That’ll give Thomas the chance to cause more drama. He’ll do whatever it takes to clear his name and restore his reputation as a respectable Forrester. The Bold and the Beautiful spoilers say Thomas will want to build something his son can be proud of. He may think he needs to leave a legacy behind for Douglas Forrester (Henry Joseph Samiri) and prove his Hope Logan (Annika Noelle) obsession is behind him.

Thomas will set his sights on the Forrester Creations throne as part of his plans. That’s obviously not going to fly with Steffy Forrester (Jacqueline MacInnes Wood)! It sounds like we’ll see some sibling rivalry going on this fall. Steffy has already endured a total nightmare due to the baby swap. Now Thomas will be battling it out with Steffy at work and trying to hijack her career goals. The nerve of that man!

However, B&B fans can expect a triumph for Steffy down the road. Perhaps she’ll get the last laugh and crush Thomas’ CEO dreams. It’d serve him right after all the threats he hurled and chaos he played a role in.