The Bold and the Beautiful Spoilers: Steffy Furious With Hope – Sides With Thomas, Blames Liam’s Wife

BY hellodrdavis on November 23, 2019 | Comments: one comment
Related : Soap Opera, Spoiler, Television, The Bold and the Beautiful 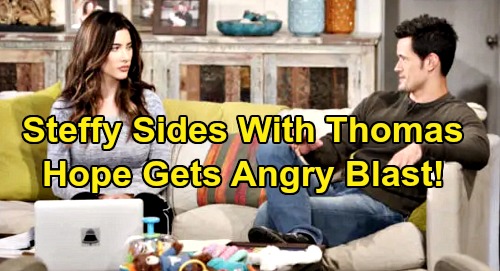 The Bold and the Beautiful (B&B) spoilers tease that Thomas Forrester (Matthew Atkinson) will soon be reunited with his family. As B&B viewers know, he’s just revealed himself to Hope Logan (Annika Noelle), who truly thought that he was dead and that she killed him. Hope was overcome with emotion when she saw that Thomas was alive, and it seems that she and Thomas might just come to an agreement and get back on decent terms with each other.

After all, B&B spoilers indicate that Hope and Thomas will tell Douglas Forrester (Henry Joseph Samiri) together that Hope is now his new mother. That doesn’t sound like something they’d do if they were still estranged or had bad blood between them. But just because Thomas is probably going to forgive Hope for her actions and understand that she didn’t intend to push him off the catwalk and into the vat, that doesn’t mean everyone will be so understanding.

For example, Ridge Forrester (Thorsten Kaye) is going to be absolutely floored by the whole story about Thomas and the acid. And he won’t appreciate it that Hope didn’t come forward immediately, but he’ll surely be more focused on Brooke Forrester’s (Katherine Kelly Lang) role in the whole thing. After all, Brooke’s the one who urged Hope not to come forward. Brooke will likely get the brunt of Ridge’s wrath, not Hope.

But what about Steffy Forrester (Jacqueline MacInnes Wood)? She was, of course, horrified to hear how Thomas behaved toward Hope after their dinner together at Forrester Creations. She was sickened to hear how he chased Hope around the building while Douglas was off alone in some room. But that’s probably going to be nothing compared to how she’ll feel when she learns that Hope pushed Thomas into what she thought was hydrofluoric acid.

Steffy’s blood will probably boil when she hears the story of Thomas’ fall. She’ll be terrified about what could have happened to her brother, and she’ll probably be livid when she hears that Hope didn’t report the incident and just took Douglas and went home to regroup with Brooke. And while Steffy and Ridge were wondering and worrying about Thomas, Hope was sitting around at home thinking he was dead…yet she didn’t say a word.

One can only imagine what kind of fury Steffy will unleash on Hope when she sees her next. After all, Hope was the person who previously didn’t want Taylor Hayes (Hunter Tylo) anywhere near Kelly Spencer (Zoe Pennington) or Beth Spencer (River Davidson and Madeline Valdez) because she was “too dangerous.” Steffy might point out that one could consider Hope to be dangerous, too.

We’ll see what happens here, but it seems like Steffy would have a few choice words for Hope about the whole situation. Of course, Hope will likely explain that what happened on the catwalk was an accident, but the fact that she didn’t come forward right away might give Steffy pause. After all, accidents don’t normally get covered up.

Do you think we’ll see Steffy unleash on Hope for what she did to Thomas? Stay tuned to B&B and don’t forget to check CDL often for the latest Bold and the Beautiful spoilers, updates, and news.