The Bold and the Beautiful Spoilers: Steffy Loses Phoebe To Hope – But Ends Up Pregnant With Liam’s Baby? 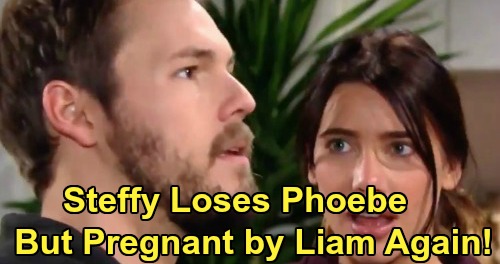 The Bold and the Beautiful spoilers tease that Steffy Forrester (Jacqueline MacInnes Wood) will have a tough road ahead of her. Eventually, the baby swap secret is going to come out. However the truth is revealed, lives are going to be changed forever and three people are going to find themselves with some serious tension between them. Steffy, Hope Logan (Annika Noelle), and Liam Spencer (Scott Clifton) will likely wind up in some serious conflict.

While Hope and Liam will have something to celebrate as they reclaim their daughter, for Steffy the revelation about Beth Spencer being Phoebe Forrester (River Davidson and Madeline Valdez) will be horrifying. Of course, she’ll be happy for Liam and Hope on some level, but she’ll have to give up her adopted daughter forever. She and Beth/Phoebe have had plenty of time to bond, and it won’t be easy for Steffy to let her go.

Of course, once Liam and Hope know that Beth is alive, there’s a very good chance that they’ll end up getting back together. Sure, Hope will then be married to Thomas Forrester (Matthew Atkinson), but it stands to reason that as soon as Hope gets her family back, she’ll likely kick Thomas to the curb. It won’t be easy, but surely Hope will want her happy family with Beth and Liam.

And that will leave Steffy without a daughter and without Liam as a full-time dad to Kelly Spencer (Chloe Tepermam and Zoe Pennington). That’s going to be agonizing for Steffy, as she tries to adjust to life as a single mom with only one of her daughters with her.

But there could be a twist coming. B&B viewers will remember that Liam and Steffy recently made love, and it seemed to be a very spontaneous move. There’s a good chance that Steffy could wind up pregnant from the encounter, and one has to wonder about the timing of everything.

It’s not clear at this point exactly when the big reveal about Beth being Phoebe is going to take place, but things seem to be heading in that direction. We could see the secret come out in the next few weeks, and that would be right around the time that Steffy could be finding out that she’s pregnant. It would be a very soapy twist if Steffy were to lose Beth/Phoebe, only to find out shortly thereafter that she’s pregnant with a baby of her own.

Of course, no child could ever replace Beth/Phoebe for Steffy, but the news of a new baby might give her some hope for the future and help her deal with the devastation that she’s going to feel from losing her adopted daughter. And if a Steffy pregnancy happens, then that will likely mean more ongoing conflict for Steffy, Liam, and Hope.

Liam and Hope could be settling back into life with Beth when Steffy finds out that she’s pregnant with Liam’s baby, and that would necessarily divide Liam’s attention even more between his two families. B&B viewers will remember how upset Hope was that Liam spent so much time with Kelly while she was pregnant with Beth…imagine how tough it would be if Liam had TWO children with Steffy to keep him away from Hope and Beth!

We’ll see what happens, but there’s certainly the possibility that Steffy and Liam’s night together will produce baby #3 for Liam and complicate matters even more for Steffy, Liam, and Hope! Do you think Steffy will wind up pregnant from her night with Liam? Stay tuned to the CBS soap and don’t forget to check CDL often for the latest Bold and the Beautiful spoilers, updates, and news.