The Bold and the Beautiful Spoilers: Steffy’s Paris Plan Backfires – Liam and Hope Divorce On The Way?

BY Marcy Cohen on March 27, 2019 | Comments: one comment
Related : Soap Opera, Spoiler, Television, The Bold and the Beautiful 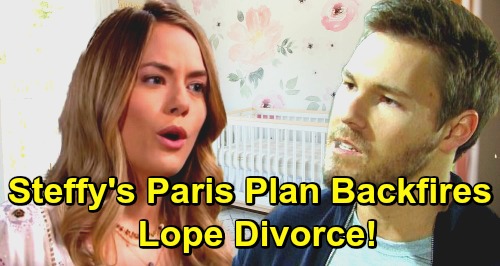 The Bold and the Beautiful (B&B) spoilers tease that Liam Spencer (Scott Clifton) and Hope Spencer (Annika Noelle) will continue to have clashing opinions. Liam knows Hope is struggling, but he believes a new baby could save her. He’s starting to think that’s the only thing that could help Hope heal.

Of course, Hope isn’t interested in opening herself up to that kind of heartache again. She doesn’t think she could handle losing another child, so she’s decided there’ll be no more pregnancies. This could obviously become a huge issue if Liam keeps pushing. He undoubtedly wants this for Hope’s sake since he’s already a father to one little girl and believes he’s a father figure to the other.

Liam’s got enough babies to do him for a while and Hope has Douglas Forrester (Henry Joseph Samiri) to keep her occupied, so Hope may not understand what the big deal is. It’s wrong for Liam to think he can determine what will or won’t help Hope. He can’t choose Hope’s path to healing for her.

What if Hope’s fears turned out to be justified and she did lose another baby? She hasn’t actually lost Beth Spencer, but she doesn’t know that. Another miscarriage or stillbirth would be more than Hope could bear. We can’t blame her for wanting to be cautious, especially since isn’t hasn’t been that long since Beth “died.”

Liam needs to cut Hope some slack and give her some breathing room. He could end up driving Hope into Thomas Forrester’s (Matthew Atkinson) arms if he isn’t careful. Steffy Forrester (Jacqueline MacInnes Wood) wants Liam and Hope to fix their relationship while she’s gone – at least she claims that’s what she wants. However, “Lope” just might be fighting a losing battle.

The Bold and the Beautiful spoilers hint that Steffy’s lengthy Paris trip may be a waste of time. In fact, it could do more harm than good. Hope might not have latched on to Douglas so much if “Phoebe” were still around. That wasn’t a healthy attachment either, but at least “Phoebe” didn’t come with a hot single dad. Bonding with Douglas means bonding with Thomas and that could seal “Lope’s” fate on B&B.

Do you think Liam and Hope’s marriage is doomed? Is Steffy’s sacrifice pointless? Will she inevitably reunite with Liam when she returns home? The Bold and the Beautiful spoilers say some great material’s on the way, so don’t miss it. We’ll give you updates as other B&B news comes in. Stick with the CBS soap and don’t forget to check CDL often for the latest Bold and the Beautiful spoilers, updates, and news.