BY Marcy Cohen on July 1, 2019 | Comments: one comment
Related : Soap Opera, Spoiler, Television, The Bold and the Beautiful 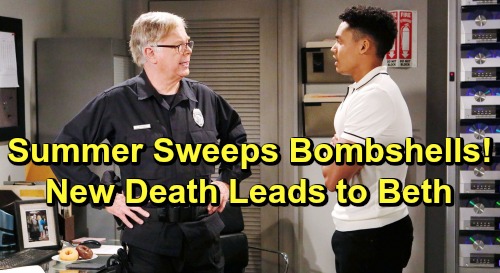 The Bold and the Beautiful (B&B) spoilers tease that summer sweeps are almost upon us. With that in mind, it’s time to take a look at all the shockers that are set to scorch! B&B will certainly be burning with passion, secrets and bombshells. Let’s talk about some of the big reveals and shakeups that are on the way.

For starters, Thomas Forrester (Matthew Aktinson) will dive deeper into the dark side. He’s drugged Liam Spencer (Scott Clifton) as part of his plan to make Hope Spencer (Annika Noelle) move on. It looks like Liam and Steffy Forrester (Jacqueline MacInnes Wood) will make love while Liam’s under the influence. Liam exhibits some crazy behavior that pushes Hope away and pulls Steffy much closer.

Thomas will get a step closer to his goal as a result. Hope will be more willing to explore a romance with Thomas once Liam’s moving on with Steffy. Meanwhile, Wyatt Spencer (Darin Brooks) decided he doesn’t want to let another second go to waste. Asking Florence “Flo” Fulton (Katrina Bowden) to move in with him was a big step, so they’ll definitely celebrate in the bedroom.

Speaking of celebrations, there’ll be a big one coming up for the Fourth of July. The Bold and the Beautiful spoilers say Independence Day will bring a marriage proposal and other major surprises. We know Thomas gives proposing to Hope another try using poor Douglas Forrester (Henry Joseph Samiri) as his spokesman.

As for what’s happening the rest of the summer, the secret-keepers will have a rough time – and it serves them right! Reese Buckingham (Wayne Brady) Flo, Zoe Buckingham (Kiara Barnes), Xander Avant (Adain Bradley), Shauna Fulton (Denise Richards) and Thomas should all be ashamed of themselves.

The Bold and the Beautiful spoilers say another character will bite the dust in the coming weeks. Thomas will be spiraling out of control, so anything can happen as things get wild! B&B fans can expect plenty of clues to emerge for those outside the secret circle. The big reveal that Beth Spencer is alive isn’t too far off, so this may explode as Summer Sweeps wraps up.

It looks like some serious drama’s coming up. We’ll give you updates as other B&B news emerges. Stay tuned to the CBS soap and don’t forget to check CDL often for the latest Bold and the Beautiful spoilers, updates and news.