The Bold and the Beautiful Spoilers: Taylor Betrays Steffy’s Adoption – Hope on a Collision Course With Baby Beth

BY Heather Hughes on January 12, 2019 | Comments: one comment
Related : Soap Opera, Spoiler, Television, The Bold and the Beautiful 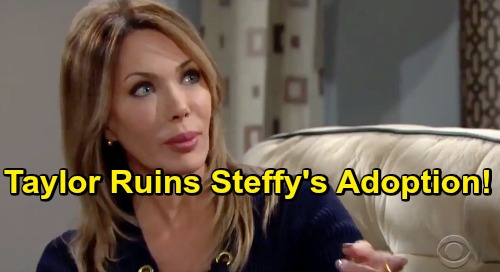 The Bold and the Beautiful (B&B) spoilers tease that Dr. Taylor Hayes (Hunter Tylo) may have already blown Dr. Reese Buckingham’s (Wayne Brady) plan. The delivery of Hope Spencer’s (Annika Noelle) baby was incredibly suspicious. No one knows the real story except Reese and he needs serious cash. Nothing quite adds up to a truly dead Beth Spencer here.

Since Reese called in a woman from his history with adoption experience, Beth Spencer must be alive and ready to go on sale. Steffy Forrester (Jacqueline MacInnes Wood) will meet Florence aka “Flo” (Katrina Bowden) as she longs to give Kelly Spencer (Zoe Pennington) a sister.

B&B buzz had been hinting that Steffy would unknowingly adopt Beth and now it seems it’s actually going to happen. Reese obviously feels guilty about his actions on Catalina Island, but he’ll see this as a way to protect his daughter. Zoe Buckingham (Kiara Barnes) is in grave danger and this could be Reese’s quickest route to the cash.

However, Taylor’s suggestion may have set Reese up for disaster. She gave Hope the phone number of a support group and grief counselor, which could bring a clue into play later.

The Bold and the Beautiful fans can’t forget about that mourning woman at the clinic. She apparently lost her child for real, so that’s undoubtedly the one Hope and Liam Spencer (Scott Clifton) have been blubbering over. They studied the baby’s body carefully and commented on the birthmark on her left leg.

That brings us back to Taylor’s idea. There’s a good chance the support group Taylor suggested will be the very same one the real mother shows up at. It’s possible Hope and this other mom will share the same grief counselor, too.

Things should get interesting if both Hope and the real mom start describing their difficult Catalina Island deliveries – and their babies with the left-leg birthmark.

Soap characters aren’t always too bright, but this would at least rev up suspicions. Hope and Liam may realize there’s something Reese isn’t telling them. More questions about that fateful night could surface and that certainly won’t be what Reese wants.

After Steffy presumably adopts Beth, it won’t be what she wants either! The same goes for Taylor, who might learn Reese’s secret eventually and keep quiet. Regardless, The Bold and the Beautiful spoilers say Taylor may regret bringing up that support group to Hope. She might’ve put her on a collision course with the truth, which could rip Steffy’s enlarged family apart down the road.

We’ll give you updates as other B&B news comes in. Stay tuned to the CBS soap and don’t forget to check CDL often for the latest Bold and the Beautiful spoilers, updates, and news.