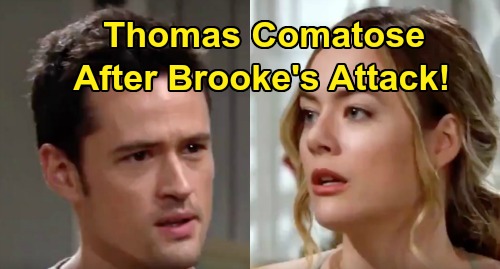 The Bold and the Beautiful (B&B) spoilers tease that Thomas Forrester (Matthew Atkinson) will have to suffer some painful consequences. His behavior will just keep getting worse in the days building up to a major showdown. Even Vincent “Vinnie” Walker (Joe LoCicero) will be taken aback by Thomas’ rage toward his own little boy.

B&B viewers know Thomas is furious over Douglas Forrester’s (Henry Joseph Samiri) betrayal. Douglas is just a kid who knew better than to lie. He shouldn’t be punished for doing the right thing, especially since he finally ended Hope Forrester’s (Annika Noelle) misery and reunited her with Beth Spencer (River Davidson and Madeline Valdez). A stolen baby was returned, so Douglas is a hero.

However, Thomas certainly doesn’t view his son that way. He’ll unleash his wrath on Douglas, so the poor fella will be terrified as he offers up Hope’s location. That’ll put Thomas at the cliff house for a serious confrontation with Hope, but things won’t work out well for him. It looks like Thomas may take a tumble off that cliff thanks to Brooke Forrester’s (Katherine Kelly Lang) desperate move.

Whatever the case, Thomas is poised to be the injured party after this frantic faceoff. The Bold and the Beautiful spoilers suggest Dr. Jordan Armstrong (Vincent Irizarry) will come on the scene to treat him. B&B buzz says there’s a good chance Thomas will wind up in a coma due to Brooke’s actions. Dr. Armstrong will work hard to save Thomas, but he may admit the prognosis is grim.

Ridge Forrester (Thorsten Kaye) should be horrified to learn Brooke has nearly killed his son. The waiting game will be brutal! Ridge will understand that Thomas messed up big time and needs professional help, but he certainly won’t think Thomas deserves to die. Steffy Forrester (Jacqueline MacInnes Wood) should feel the same way. Some intense, emotional hospital scenes are looming, so B&B fans will want to stay tuned for those.