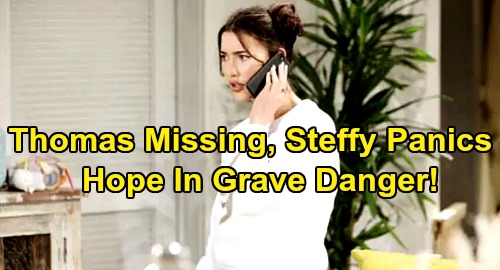 The Bold and the Beautiful (B&B) spoilers tease that Steffy Forrester (Jacqueline MacInnes Wood) will make a shocking discovery. Before we get to that, let’s talk about Hope Logan’s (Annika Noelle) latest plan. She wants to convince Thomas Forrester (Matthew Atkinson) to sign the adoption papers and give her joint custody of Douglas Forrester (Henry Joseph Samiri), which could lead to a play for full custody later.

Hope will get her wish after things spiral out of control at Forrester Creations. Disaster will strike and seemingly leave Thomas with no choice but to sign. Hope’s scheme will be a success, but this battle’s far from over. Since when has Thomas ever let anything go? His Hope obsession could easily turn into a vengeful one. He may become fixated on payback after Hope gains the upper hand.

That brings us to Steffy’s shocking discovery. She’ll be unable to reach Thomas during the week of November 18-22, so that’ll bring some worries. Steffy will keep trying to call and text, but she won’t get any reply. She’ll realize Thomas is missing, so she may fear something’s happened to him – or that he’s up to something.

Steffy won’t be pleased about Hope’s win in this custody drama, but she can’t trust Thomas either. Thomas hasn’t proven that he can be a better man. Ridge Forrester (Thorsten Kaye) feels like Thomas wants to turn his life around, but it’s clear that Thomas needs help to do that. Hope’s tactics are terrible, but that doesn’t mean Thomas can be the dad Douglas needs without professional assistance.

The Bold and the Beautiful spoilers suggest Thomas may spin out again, and the result may not be pretty for Hope. The same goes for anyone else who gets in Thomas’ way. Even Ridge will begin to see Thomas true colors soon, so that can’t be good news. It feels like all this is building to a sneak attack on Hope, which could put her or her potential rescuer in grave danger.