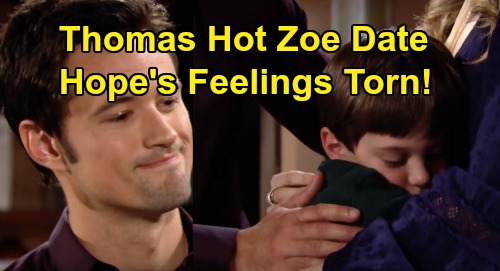 The Bold and the Beautiful (B&B) spoilers tease that Thomas Forrester (Matthew Atkinson) will kick things up a notch. He’ll realize he has to do more if he expects to have even a glimmer of hope with the woman he wants. B&B fans know Thomas is using Zoe Buckingham (Kiara Barnes) to make Hope Logan (Annika Noelle) jealous. At least that’s what he’s hoping to do! In reality, Hope’s just suspicious and a tad confused right now. She’s trying to figure out exactly what’s going on in that brain of Thomas’.

Thomas won’t make things any easier during the week of December 23-27. He’ll determine that he has to rev up his efforts to stir some feelings up for Hope. Thomas already made sure Hope saw his romantic setup for Zoe. Now he’ll want Hope to know he’s got a hot date planned with Zoe. In fact, he’ll ask Hope to watch Douglas Forrester (Henry Joseph Samiri) so he can take his time.

Hope loves spending time with Douglas and is all in on being his mother. She’ll gladly agree, but she’ll have to wonder exactly what Thomas’ motive is. Thomas will assure Hope that he just wants to put Douglas in good hands for the evening – while he really wants to make Hope jealous. He’ll suggest this will give him a chance to move things along with Zoe and focus on his future.

Hope may pretend she buys it – and maybe part of her will start to feel jealous on some level. However, Hope won’t be able to shake the feeling that something’s off here. There may be alarm bells in the back of her mind screaming that it’s all a ploy. Hope knows Thomas too well to just take his explanations at face value. He hasn’t proven he can be trusted, but Thomas will do whatever he can to make his claims seem sincere.

It looks like Hope may speak with Zoe about this date at one point – perhaps to see if she’s feeling what Thomas claims to feel. Whatever Zoe says should leave Hope even more torn about what to believe.

The Bold and the Beautiful spoilers say Hope will explain the situation to Liam Spencer (Scott Clifton), who’ll immediately worry about Zoe’s resolve – or lack thereof. Liam will definitely fret about this date night and the possibility that Zoe will bail on the plot to expose Thomas.