The Bold and the Beautiful Spoilers: Thomas Lashes Out At Douglas – Abusive Dad Crosses The Line, Risks Custody Of Son

BY hellodrdavis on August 20, 2019 | Comments: 2 comments
Related : Soap Opera, Spoiler, Television, The Bold and the Beautiful 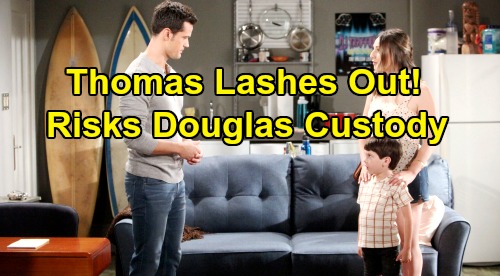 The Bold and the Beautiful spoilers tease that Thomas Forrester (Matthew Atkinson) will soon put most aspects of life as he knows it in jeopardy. As B&B viewers know, Thomas has been entirely consumed by his obsession with Hope Logan (Annika Noelle) over the past few months. He connived and schemed his way into marrying her while keeping her daughter Beth Spencer (River Davidson and Madeline Valdez) from her.

But now that his role in the Beth secret has come out and everyone knows what he did, you might think that he’d cut his losses and just give it up. But Thomas is in a deep state of denial right now, and he seems to think that if he just talks to Hope, everything will work itself out and she’ll decide that she wants to be with him. This is just crazy thinking, but that’s how Thomas thinks.

And at the same time, he has hope for a future with Hope, he remains angry at those who have gotten in his way. He’s furious with Liam Spencer (Scott Clifton) and absolutely detests him for stepping in and “ruining” things for him with Hope. But there’s someone else that Thomas is upset with as well, and that’s his 5-year-old son Douglas Forrester (Henry Joseph Samiri).

In a recent episode, Thomas was seen ranting about those who had done him wrong, and it certainly appeared that he included his son among them. Of course, a rational person wouldn’t think this way – after all, Douglas is just a little kid and he was compelled to tell the truth about the Beth secret once he heard it. He did the right thing, and for Thomas to be angry with him about it is unconscionable.

Well, it seems that Thomas is soon going to take out some of his anger on Douglas. According to B&B spoilers, Thomas will get Steffy Forrester’s (Jacqueline MacInnes Wood) unsuspecting nanny Amelia (Nicola Posener) to bring Douglas to him. From there, it looks like Thomas will berate his son and start in on him for spilling the Beth secret.

Of course, B&B viewers will remember that Thomas got a little physical with Douglas on a prior occasion, when he was trying to get Douglas to keep the secret in the first place. Thomas grabbed Douglas’ arm forcefully, and Douglas told his father that he was mean. It looks like we could see a similar thing happen in an upcoming episode, as Thomas’ anger takes over and he yells at Douglas.

Now, for many viewers, this will mean that Thomas is crossing a big line. Douglas is a sweet kid who did the right thing, and Thomas’ behavior could certainly be considered to be abusive. And that leads us to wonder whether Thomas as a character will ever be able to recover from what he’s now doing.

It also leads us to wonder whether Thomas will ever regain custody of Douglas. Douglas certainly won’t be one to keep his dad’s abusive actions and language a secret, and he may refuse to be around his dad in the future, which could raise questions about Douglas’ custody and whether Thomas is an unfit father.

Do you think that Thomas will lose custody of Douglas after all he’s said and done? Stay tuned to the CBS soap and don’t forget to check CDL often for the latest Bold and the Beautiful spoilers, updates, and news.