The Bold and the Beautiful Spoilers: Thomas Offers Steffy Opportunity To Get Liam Back – Will Steffy Take ‘Steam’ Or Hold Out For New Man?

BY hellodrdavis on December 1, 2019 | Comments: 2 comments
Related : Soap Opera, Spoiler, Television, The Bold and the Beautiful 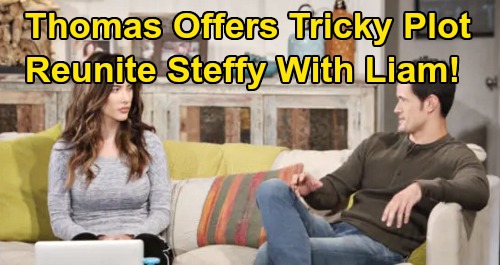 The Bold and the Beautiful (B&B) spoilers tease that Steffy Forrester (Jacqueline MacInnes Wood) has been doing her best to forgive her brother Thomas Forrester (Matthew Atkinson). She’s been taking baby steps toward rebuilding their sibling relationship, and they’re in a far better place now than they were several weeks ago, after the Beth Spencer (River Davidson and Madeline Valdez) drama came to a head. She’s slowly accepting her brother back into her life, which makes him quite happy.

But it seems that part of the reason that Thomas is so happy about getting back to a good relationship with Steffy has to do with his plans for Hope Logan (Annika Noelle). Even after everything that he’s done in the past, Thomas still feels that he and Hope could have a future together. He thinks he made strides when he proved his big point to Hope by staying away and letting her think that he was dead for a day.

And to be fair to Thomas, he does seem to have made some inroads with Hope. She seems to have softened toward him a bit and is willing to co-parent Douglas Forrester (Henry Joseph Samiri) with him. And that has once again made her vulnerable to Thomas’ grand plan – to get her away from Liam Spencer (Scott Clifton) and all to himself.

Well, recently, Thomas has made some insinuations to Steffy about how she could have Liam again if his plan with Hope works out. Clearly, what Thomas wants is for Steffy to somehow woo Liam away from Hope again while he woos Hope. But is that even realistic at this point? Steffy has seemed to be mildly tempted by the thought of having Liam back as a full-time dad to Kelly Spencer (Zoe Pennington), but would she really team up with Thomas to make that happen?

It all seems pretty doubtful that Steffy would team up with Thomas on anything at this point, other than official Forrester Creations business. Besides, it seems that Steffy might be holding out for a new man. As B&B viewers know, she recently revealed to Liam that she had started the sign-up process for a dating app on her phone, so it certainly looks like she wants someone new at this point.

It just doesn’t seem like Steffy would take Thomas up on any offer that he might make to her about teaming up to come between Hope and Liam. Steffy’s in a very different place than Thomas right now. She doesn’t seem to want to rely on schemes or manipulation to get a man, in the way Thomas tries to use manipulation to get to Hope. We suspect that Steffy will both discourage Thomas from his schemes and personally stay far away from them.

We’ll see what happens with Thomas and Hope going forward. He might just have some success in using Douglas to drive a wedge between her and Liam. And if so, that could draw Liam closer to Steffy. Do you think Steffy really wants Liam back, or is she holding out for a new man? Stay tuned to B&B and don’t forget to check CDL often for the latest Bold and the Beautiful spoilers, updates, and news.