The Bold and the Beautiful Spoilers: Thomas Wants Hope – Schemes To Break Up Lope’s Marriage

BY hellodrdavis on April 14, 2019 | Comments: one comment
Related : Soap Opera, Spoiler, Television, The Bold and the Beautiful 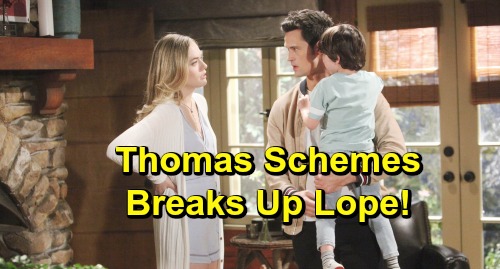 The Bold and the Beautiful spoilers tease that Thomas Forrester (Matthew Atkinson) will soon find himself on a mission. He has been growing closer to Hope Spencer (Annika Noelle) lately, as Douglas Forrester (Henry Joseph Samiri) has been requesting a lot of time with Hope. Douglas and Hope have been filling the holes in each other’s hearts and helping each other as they grieve the major losses in their lives.

According to B&B spoilers, Thomas will soon find himself developing real feelings for Hope. Previously, Ridge Forrester (Thorsten Kaye) warned Thomas about getting too close to Hope, and Thomas assured him that his intentions were pure and that his connection with Hope was entirely about Douglas. But it seems that Thomas won’t be able to help his feelings as he continues to spend time with Hope and watch her around his son.

B&B spoilers say that Thomas will soon confess his growing feelings to his father. Ridge will be alarmed, and he’ll probably start to wonder whether Taylor Hayes’ (Hunter Tylo) prediction about a Thomas/Hope love connection is coming true. Ridge will likely warn his son again about getting too close to an already-married woman, but it doesn’t look like Thomas is going to heed his dad’s warning.

Instead, B&B spoilers indicate that Thomas will take some steps to put himself closer to Hope and undermine her marriage with Liam Spencer (Scott Clifton). First, Thomas will decide that he wants to go back to work at Forrester, but he won’t have any old assignment in mind. He’ll want to work specifically on Hope For The Future (HFTF). Of course, HFTF took a back seat to the Intimates collection for a while, so it’s time to revitalize the line. Thomas will argue that he’s just the man for the job.

It will apparently be a calculated move on Thomas’ part, one that will put him in direct proximity with Hope on a daily basis. But Thomas won’t stop there. Next, he’ll start to interfere in Hope and Liam’s marriage by planting the seed in Hope’s mind that she should encourage Liam to visit Steffy Forrester (Jacqueline MacInnes Wood) and the girls in Paris.

It certainly sounds like Thomas might be on the path to making a play for Hope. He knows that Hope’s marriage with Liam is in a vulnerable state right now, and that she seems to be happier when she’s with him and Douglas. It all sounds like a recipe for disaster for Lope’s marriage!

Do you think Hope and Thomas will eventually get together? Stay tuned to the CBS soap and don’t forget to check CDL often for the latest Bold and the Beautiful spoilers, updates, and news.