The Bold and the Beautiful Spoilers: Thursday, January 17 – Wyatt and Hope Reflect On Past – Katie’s Impressed By Bill

BY hellodrdavis on January 16, 2019 | Comments: one comment
Related : Soap Opera, Spoiler, Television, The Bold and the Beautiful 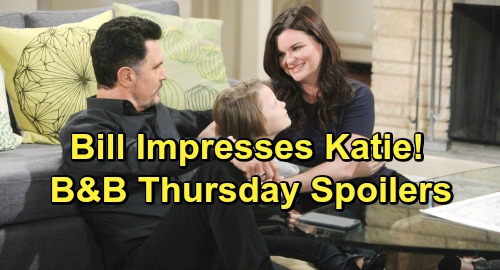 The Bold and the Beautiful spoilers for Thursday, January 17, tease that Wyatt Spencer (Darin Brooks) and Sally Spectra (Courtney Hope) will pay Hope Spencer (Annika Noelle) and Liam Spencer (Scott Clifton) a visit. Family have been steadily checking in on Hope and Liam since they lost baby Beth Spencer, and now it is Wyatt and Sally’s turn.

The two couples will visit and grieve together, as Wyatt and Sally help Hope and Liam to move on with life. But it seems that Hope and Wyatt will get a little alone time during the visit. B&B spoilers say that they’ll reflect back on their own past a bit.

Viewers will remember that Hope miscarried Wyatt’s baby several years ago. Of course, that situation was very different than Beth’s death, as Hope miscarried early in her pregnancy while Beth died upon delivery. Wyatt and Hope won’t be able to help but think about their own loss in light of Beth’s death.

Meanwhile, on the new episode of B&B on Thursday, January 17, Bill Spencer (Don Diamont) will drop Will Spencer (Finnegan George) off at Katie Forrester’s (Heather Tom) place after their afternoon together. Bill and Will just spent some quality time together talking about finances and the importance of family.

Katie will beam as she watches Bill interacting positively with his son, and she’ll be impressed with Bill’s ability to connect with Will. Thorne Forrester (Ingo Rademacher) will also be present, and he’ll uncomfortably notice Katie’s enthusiasm for the new Bill.

Thorne will be shocked when Katie wants Bill to stay for dinner, but she’ll eventually persuade him, and Bill will stick around to Will’s delight. Thorne won’t be happy about it, but he’ll be outnumbered and won’t want to let Will down.