The Bold and the Beautiful Spoilers: Liam Connects with Steffy and Adopted Baby Phoebe – Hope Burns With Jealousy 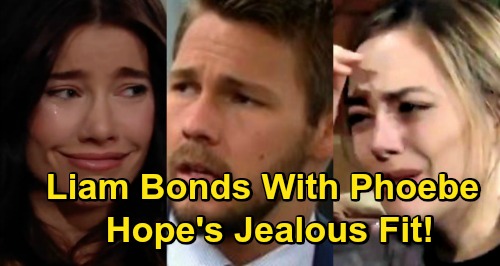 The Bold and the Beautiful (B&B) spoilers tease that Steffy Forrester’s (Jacqueline MacInnes Wood) decision will spell trouble. Liam Spencer (Scott Clifton) doesn’t want his loss with Hope Spencer (Annika Noelle) to affect Steffy’s choices. “Lope’s” current battle is theirs and theirs alone. Hope and Liam have to pick up the pieces of their shattered hearts, but Steffy’s free to do what she wants.

That’s why Steffy won’t let Beth Spencer’s “death” get in the way of her family expansion plans. Next week, Steffy will decide that this is for sure happening. She’ll want to give Kelly Spencer (Zoe Pennington and Chloe Teperman) a little Phoebe Forrester of her own to bond with. Steffy’s heart will be filled to the brim when she brings her new baby home. She’ll love seeing her sweet girls together.

However, there’s no denying that this will be rough on “Lope.” Liam can say it’s fine all he wants, but the fact is this kid will be the same age as Beth would’ve been and she’ll look how Beth would’ve looked. That’s because she almost certainly IS Beth, but Liam and Hope won’t know that. They’ll just see Phoebe as a reminder of what they lost. It’ll break their hearts all over again to see this baby.

Hope can at least close herself off from the situation and keep her distance. That may be what she’ll do at first. There’s a chance Hope will be drawn to Phoebe and start bonding later, but the wound may too fresh right now. The Bold and the Beautiful spoilers say it might be Daddy Liam who does the initial bonding.

After all, B&B fans know Liam spends plenty of time with Kelly. He’ll naturally be around Steffy’s new little one, too. Liam told Steffy that he’d want to hang out with Kelly more to cope with his loss. Steffy may invite Liam to use Phoebe to cope as well. She’ll consider all of them to be a family, so there’s no reason for Liam to be shy about holding Phoebe and cuddling with her.

Of course, Liam and Steffy could easily go overboard. Will Hope be hurt by Liam, Steffy, Kelly and Phoebe’s family unit? Will she be jealous and devastated if Liam starts spending all his time with them instead of mourning the loss with her?