BY hellodrdavis on June 12, 2019 | Comments: one comment
Related : Soap Opera, Spoiler, Television, The Bold and the Beautiful 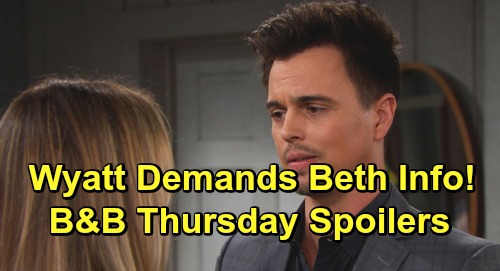 The Bold and the Beautiful spoilers for Thursday, June 13, tease that Thomas Forrester (Matthew Atkinson) will be in a real bind. He feels a strong pull to tell Steffy Forrester (Jacqueline MacInnes Wood) the truth about Phoebe Forrester (River Davidson and Madeline Valdez) actually being Beth Spencer. He knows that telling the truth is the right thing to do, but after what he’s just witnessed at Steffy’s house, he’s having second thoughts.

As B&B viewers know, Thomas has just watched Steffy and Liam Spencer (Scott Clifton) interact with Phoebe and Kelly Spencer (Chloe Teperman and Zoe Pennington), and they were a picture-perfect family together. Thomas was truly touched by how Liam, Steffy, and the girls got along and he’s feeling protective toward his sister.

Of course, Thomas knows that Steffy would be absolutely devastated to lose Phoebe. He knows that Steffy loves Phoebe just as if she gave birth to her, and as he stands in front of Steffy ready to tell her all about how Phoebe is really Beth, he’ll make a snap decision. Wanting both his sister’s happiness and Hope Logan (Annika Noelle) for himself, he’ll decide to keep the secret to himself.

Exactly what Wyatt hears remains to be seen, but he’ll likely hear Beth’s name, which should cause him great concern. Plus, it will just be weird to see Zoe, Flo, and Xander together having an intense conversation. At any rate, Wyatt will get worried and will demand answers from the trio about what’s going on.

Of course, since B&B spoilers say that the truth about Beth isn’t going to come out just yet, it looks like Flo, Zoe, and Xander will succeed in lying to Wyatt about what’s going on. This should certainly cause Flo even more guilt, as well as a great deal of worry about possibly losing Wyatt.