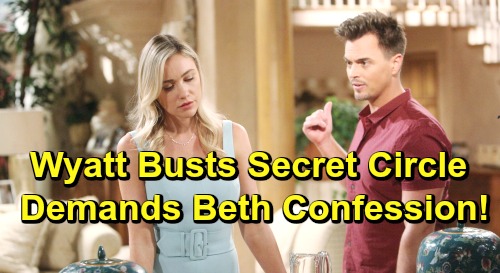 The Bold and the Beautiful (B&B) spoilers tease that Florence “Flo” Fulton (Katrina Bowden) will take a bad situation and make it worse by spilling the beans to Thomas Forrester (Matthew Atkinson).

Once Thomas knows the truth about Beth Spencer, it’ll give the secret club even more problems to deal with. Unfortunately, Zoe Buckingham (Kiara Barnes) and the gang still won’t learn their lesson.

You’d think Zoe and Flo would know to be more careful at this point. Xander Avant (Adain Bradley) overheard the secret, so they should really save this topic for truly private discussions. If there’s a chance someone’s lurking, it’s not wise to rant about a dead baby actually being alive.

However, B&B characters rarely learn their lesson. That’s why Zoe, Flo and Xander will face another close call during the week of June 10-14.

The Bold and the Beautiful spoilers say Wyatt Spencer (Darin Brooks) will walk in on their heated argument. He’ll manage to catch the part where they are talking about Beth, so he’ll definitely be suspicious.

Since things will be so tense, Wyatt will demand to know what’s going on. He won’t understand why Flo, Xander and Zoe would be fighting over Hope and Lam Spencer’s (Scott Clifton) deceased child. Of course, the three of them should think fast to cover their blunder. They can’t afford to let too many people in the loop on this shocker.

A Clue That Will Kick In Later?

The fact that Xander and Thomas will know is bad enough – at least from Flo and Zoe’s side of things. Flo will be especially determined to leave Wyatt in the dark. She’ll realize Wyatt would dump her in a heartbeat if he knew she posed as “Phoebe Forrester’s” (River Davidson and Madeline Valdez) birth mom.

Wyatt cares about Liam, Hope and Steffy Forrester (Jacqueline MacInnes Wood). These are people he loves dearly, and Flo’s actions affected all of them. The Bold and the Beautiful spoilers hint that Zoe, Xander and Flo will manage to keep Wyatt out of the secret circle for now. Nevertheless, this incident could still serve as a clue that makes it all click later. Anything can happen down the road!

It should be interesting to see how Flo and the others handle the rising pressure. Do you hope Wyatt can eventually solve the puzzle? Could he be the one to expose everything when the time comes? We’ll give you updates as other B&B news comes in.