BY hellodrdavis on March 27, 2019 | Comments: one comment
Related : Soap Opera, Spoiler, Television, The Bold and the Beautiful 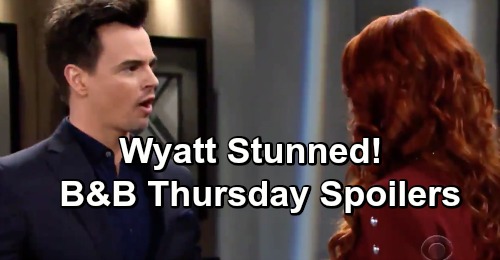 The Bold and the Beautiful spoilers for Thursday, March 28, tease that Wyatt Spencer (Darin Brooks) will put his mom Quinn Forrester (Rena Sofer) on the spot. Quinn has just totally disrespected Wyatt’s relationship with Sally Spectra (Courtney Hope) by gushing over Florence “Flo” Fulton (Katrina Bowden) and going on about how perfect Wyatt and Flo are for each other.

Wyatt wasn’t happy about his mom’s behavior, and he got fiercely defensive after he learned that Sally had overheard Quinn’s whole monologue about Wyatt and Sally’s compatibility. B&B spoilers say that Wyatt will demand an apology from his mom immediately, but that Quinn will be reluctant to offer one. After all, she was just speaking from the heart and talking about the past.

But with Sally by his side, it looks like Wyatt will be adamant that an apology is necessary, so Quinn will reluctantly say she’s sorry for her words and also for disrespecting Wyatt’s relationship with Sally. Wyatt will hope that the apology will settle the matter, but chances are this will only be the beginning of “Wally’s” problems with Quinn.

Sally may start to feel insecure around Quinn, whom she now knows would prefer Wyatt to be paired up with Flo. And since Flo will be around for a while, this problem isn’t going to just fade away. We’ll likely see some tension going forward between Quinn and Sally, in typical B&B fashion.

Next, on the new episode of B&B on Thursday, March 28, Sally will have some big news for Wyatt. When she interrupted the whole scene with Quinn gushing over Flo, she was on her way to tell Wyatt about her new job offer from Forrester Creations. And once Quinn and Flo are on their way, Sally will have the difficult task of telling Wyatt about the offer.

B&B spoilers say that Wyatt will be floored when he hears that Sally is rethinking her decision to come to Spencer Publications and head up the new “Spencer Fashions.” After all, Wyatt really went out on a limb to get Sally that gig, and Wyatt may feel a bit slighted that Sally would consider going back on her decision.

But chances are, when Wyatt learns about the great opportunity that now exists for Sally at Forrester, he’ll understand where she’s coming from. Ridge Forrester (Thorsten Kaye) made an appealing pitch, offering to let Sally use the Spectra name in her designs, which is a huge appeal for Sally. Wyatt will likely understand this, although he’ll surely feel disappointed that Sally may not be joining him at Spencer.

Still, if Sally ultimately decides to remain at Forrester and reject the new opportunity at Spencer, then it could cause some hurt feelings between herself and Wyatt. And it will certainly affect their relationship going forward, since they won’t be working together and enjoying that aspect of closeness in their relationship. We’ll see whether it will cause problems for them going forward.