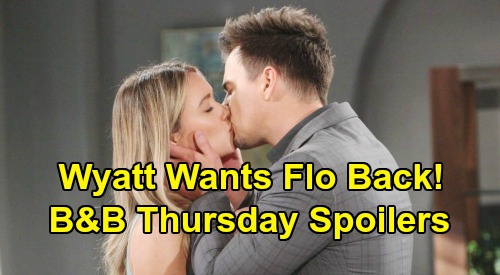 The Bold and the Beautiful spoilers for Thursday, October 24, tease that Ridge Forrester (Thorsten Kaye) will be in for a big surprise. As B&B viewers know, Hope Logan (Annika Noelle) has just implored Thomas Forrester (Matthew Atkinson) to sign papers allowing her to adopt Douglas Forrester (Henry Joseph Samiri). And during their interaction, Thomas became discombobulated and his obsession over Hope re-emerged. In a weak moment, he actually agreed to consider signing the adoption papers.

But soon, it seems that Ridge will be on the scene, and he’ll have something to say about the whole situation. B&B spoilers indicate that Ridge will appear at the mansion, where he’ll learn about the plot to get Thomas to terminate his parental rights and give his son over to Hope and Liam Spencer (Scott Clifton). Ridge will be decidedly unhappy about the situation, and it looks like he’ll be able to snap Thomas out of it and declare that no one is going to be adopting Douglas.

Ridge will lash out at Hope and Liam for even thinking about trying to take Thomas’ son away from him, and it looks like a big showdown will ensue. And during the standoff, it will come out that Brooke Forrester (Katherine Kelly Lang) was behind the attempt to coerce Thomas into giving up Douglas. Ridge will be horrified to learn that Brooke had a lawyer draw up papers and that Hope tried to use Thomas’ feelings for her to coerce him into signing away his parental rights.

Meanwhile, on the new episode of B&B on Thursday, October 24, Bill Spencer (Don Diamont) will pay Wyatt Spencer (Darin Brooks) a visit. Bill will of course want to see his son, but he’ll also have something to discuss. He’ll let Wyatt know that Quinn Forrester (Rena Sofer) came to see him with a big request – she’ll have asked Bill to meddle in Wyatt’s relationship with Sally Spectra (Courtney Hope).

As B&B viewers know, Wyatt and Sally are engaged, but Wyatt has recently reconnected with his ex, Flo Fulton (Katrina Bowden). After Wyatt found out that Flo was Katie Logan’s (Heather Tom) life-saving kidney donor, he went to visit Flo and had a nice conversation with her. He seems to have gotten past Flo taking part in Reese Buckingham’s (Wayne Brady) baby swap and adoption scam, and now he admires Flo for making the sacrifice to save Katie’s life.

Well, it seems that Bill will have a heartfelt talk with Wyatt about Flo. Bill was previously hell-bent on making Flo and Shauna Fulton (Denise Richards) pay for what they did to Beth Spencer (River Davidson and Madeline Valdez). But it looks like he’ll admit that he can’t deny that Flo’s actions and generosity saved Katie’s life. He’ll tell Wyatt that he’s softened toward Flo – after all, it’s because of her that he still has Katie and Will Spencer (Finnegan George) still has a mother.

Still, it doesn’t look like Bill is going to meddle in Wyatt’s love life as Quinn wanted. Unlike Quinn, Bill tends to recognize that Wyatt is a grown man who can make his own decisions about who he wants to be with. But it seems that Bill will at least put in a good word for Flo, or at least he’ll indicate that he wouldn’t be upset if Wyatt ultimately chose to leave Sally and unite with Flo again.

According to B&B spoilers, all of this will get Wyatt thinking. Of course, he loves Sally and was completely serious about wanting to marry her, but it looks like he’ll realize that he still has lingering feelings for Flo, too. All of this may lead Wyatt to do some serious soul-searching and reflection on exactly what he wants going forward. He’s going to realize that he loves two women, and he’ll need to make a choice about what to do next.